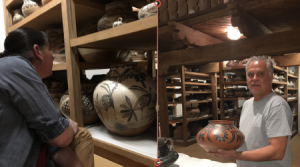 Join Bruce Bernstein, Erik Fender, and Russell Sanchez for a conversation and home studio visits to learn about pottery making and pottery history. The three presenters have been working together for several years, researching and studying pottery and the village’s pottery families. Together, they have curated Voices of the Clay, an exhibit at Santa Fe’s Museum of Indian Arts and Culture (MIAC).

In the presentation, the three will share how the collections from the Indian Arts Research Center at SAR and the collections at MIAC provided valuable insights in their research. Bernstein will moderate the salon and virtual studio tour. Participants will learn about the history of San Ildefonso pottery as well as the materials and techniques used in the works of contemporary San Ildefonso potters. Included in the presentation will be a live pottery firing.

Bruce Bernstein, PhD, is the Director of Innovation & Senior Curator at the Coe Center, where he develops public programming, working directly with Indigenous artists and the permanent collection of traditional arts. His previous positions include Assistant Director for Collections and Research at the National Museum of the American Indian, Smithsonian Institution; Chief Curator and Director of Santa Fe’s Museum of Indian Arts and Culture and Laboratory of Anthropology; and Executive Director of the Southwestern Association for Indian Arts. He has dedicated his three decades of work in museums to collaborative work and modeling new partnerships.

Russell Sanchez (San Ildefonso Pueblo) is an award-winning artist who has been described as a master innovator in Pueblo pottery. Known for his hand-coiled, etched and inlaid creations, Sanchez crafts each piece using traditional Native American pottery methods.

Sanchez was a recipient of the New Mexico Governor’s Award for Excellence in Art 2017. In 2019, he earned the “Best of Pottery” distinction at Santa Fe Indian Market. He is one of the co-curators of the MIAC exhibit, Voices of the Clay.

Erik Fender (San Ildefonso Pueblo) is an established artist whose works of pottery, he explains are influenced by his mother, Martha Appleleaf, and his grandmother, legendary potter Carmelita Dunlap. Fender’s work ranges from traditional to contemporary. He has become recognizable for a style of green-on-black and green-on-red pieces. Fender has received first place awards at Santa Fe Indian Market among other awards. He is one of the co-curators of the MIAC exhibit, Voices of the Clay.