SAR Adventures in Archaeology: An International Journey to Brazil

When SAR organizes field trips, we recruit experts who can lead our members beneath the surface and deep into the places we visit to reach a more profound understanding of local history and culture. Many of these experts are SAR alumni, former scholars whose work has benefited from their time on our campus.

Anna Curtenius Roosevelt is one such scholar. Since her time at SAR as a 1989-1990 resident scholar, Anna’s archaeological work has radically transformed scientific understanding of pre-contact Amazonia, once thought to be a region characterized by simple societies and sparse populations. Anna has shown that the early Spanish explorers of the Amazon—such as the Dominican missionary Gaspar de Carvajal (b. 1500—d. 1584), whose detailed descriptions of complex and densely populated communities on the shores of the Amazon River were long dismissed as wildly exaggerated—were in fact credible. Her work has also shown that early Amazonian peoples modified their landscape in ways that permitted sufficient agricultural production to support large populations and a degree of social hierarchy.

The Monte Alegre Paleoindian site, which we visited on this trip, is of particular interest because the work of Roosevelt and her colleagues has convincingly dated Monte Alegre’s pictographs to ten thousand years ago and possibly earlier, which places them among the earliest rock art in the New World. There is also intriguing evidence that some of the images have a calendrical function, correlating with solar cycles.

Roosevelt’s contributions to the field illustrate the kind of bold originality that SAR seeks in its resident scholars, the fruits of which we are pleased to share with our members and the world in general. In what follows, fellow traveler and SAR board member Diane Vennema conveys the excitement of our journey.

On the third of January, 2019, fourteen intrepid travelers arrived in Manaus, Brazil for an Amazonian adventure led by SAR President Michael F. Brown and noted archaeologist (and former SAR Scholar), Anna Roosevelt. Manaus, in the heart of the Amazonian rain forest and accessible only by boat or by air, flourished during the 19th century rubber boom. Musical performances are still held in its newly-restored opera house, a grand pink-and-white confection with painted ceilings, gold leaf accents, Carrara marble, and Murano glass chandeliers.

Following our city tour, we boated down the tannin-dark Rio Negro to visit an indigenous village, one of many we passed, their houses perched high on stilts as protection from the seasonal rising of the river. We swam with pink Amazonian dolphins, then headed downstream to the Meeting of the Waters, where the Rio Negro joins the red-brown Amazon, the two flowing side-by-side for miles without mixing. We hiked through a tropical forest and climbed a tower to look down on the canopy from above.

Next, we traveled to the sleepy town of Santarém, our staging ground for the highlight of our trip, a visit to the ancient sites excavated by Professor Roosevelt, a great-granddaughter of Theodore Roosevelt. Her work at Serra da Lua and Caverna da Pedra Pintada (the Cave of the Painted Rock) caused a sensation in the 1990s when carbon dating proved that ancient people had been living, farming, and painting on walls for at least twelve thousand years, far earlier than scholars had previously believed South America to be inhabited by humans.

Prepared by Professor Roosevelt’s lecture the previous night, we left Santarém in the early morning, traveling first by boat, then continuing by van to Monte Alegre and our first site, Serra da Lua. Here, we climbed the rocky base of a cliff to a wide outcropping of sandstone teeming with ancient pictographs painted in deep reds, yellows and browns. From there we piled into a caravan of jeeps, making our way through the forest over impressively rough roads until we reached the path that led to the shallow Cave of the Painted Rock. It was a stunning gallery of ancient art—abstract symbols, hand prints, comets, animals, a pair of feathery owls, and female figures with their unborn babies shown inside their bodies. Our final stop was the Painel do Pilao, another outcropping heavily painted with images—more handprints, a woman giving birth, abstract symbols, and a chart-box that appears to be a calendar. In this place, high above the forest canopy, Paleoindians near the end of the Ice Age could view the horizon and keep a record of the sun’s changing positions in a seasonless equatorial world.

Our final days were spent in Belém, where the highlight was our visit to the Parque Zoobotânico, established in 1895. Lush with mature tropical growth, there was wildlife everywhere, from brightly colored macaws and scarlet ibis to an enormous caiman, busy agoutis, and a giant manatee in a cloudy pool. In the center of the park is the Museu Paraense Emilio Goeldi (the Goeldi Museum). Founded in 1866, it predates the park and is the oldest scientific institution in the Amazonian region. There, we were introduced to the museum’s ethnology curator, Dr. Glenn Shepard, an ethnobotanist, medical anthropologist, and filmmaker who told us with delight that both Michael Brown and Anna Roosevelt had been important influences in his career.

While rain poured outside, Dr. Shepard treated us to an impromptu lecture on his work with the remote Matsigenka people, who were less interested in being filmed than in taking cameras in hand to film themselves, which they did with great care and astonishing results. By the time he’d finished his talk, the rain had stopped. We went outside and had our pictures taken together, ending our final day in Brazil with a fresh awareness of everything we’d seen and learned—about the art and history of Paleoindians, the ecology of a region with an unrivaled diversity of plant and animal species, and the unique culture of modern Brazilians still living on the shores of the world’s longest river. 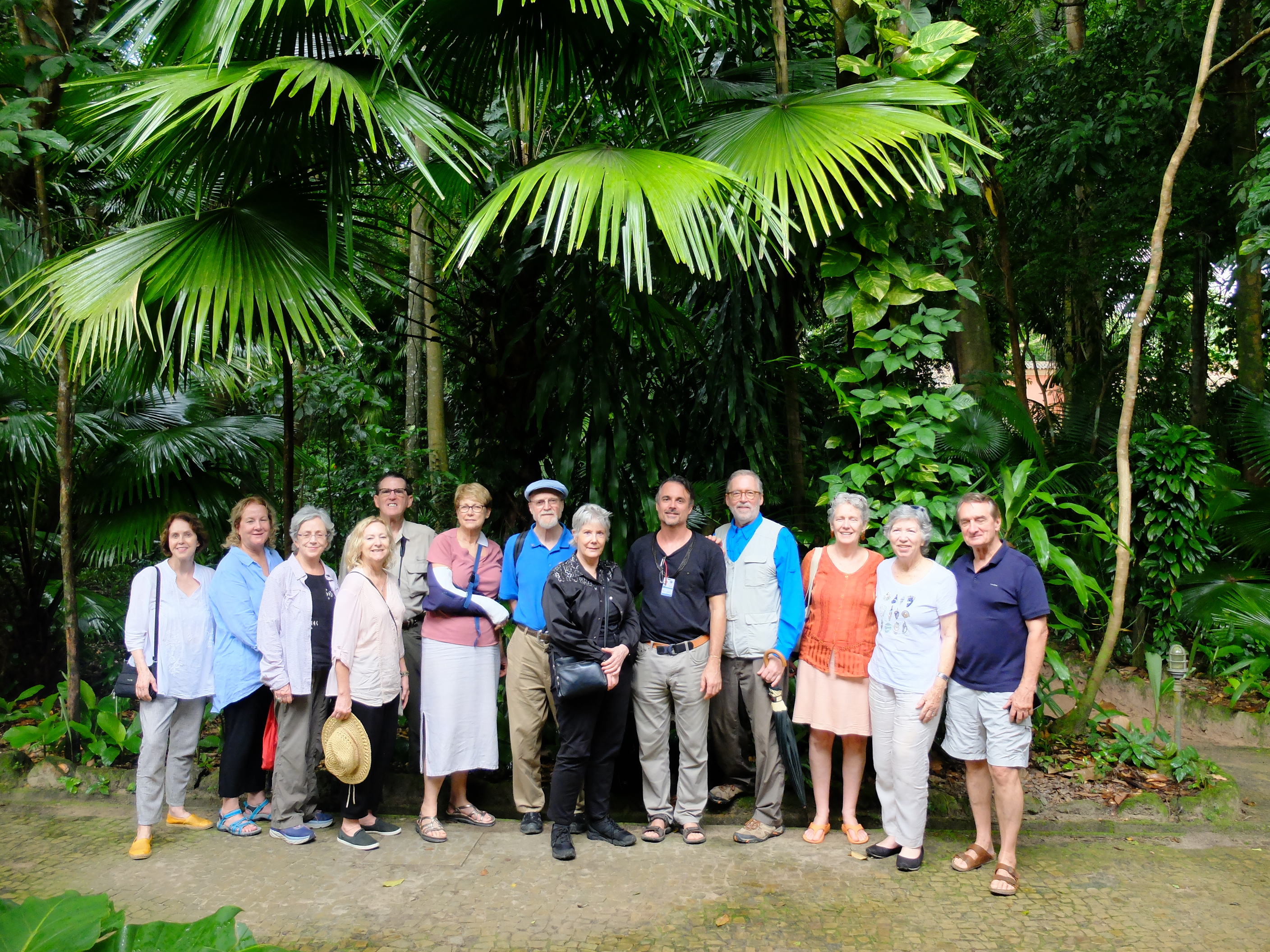 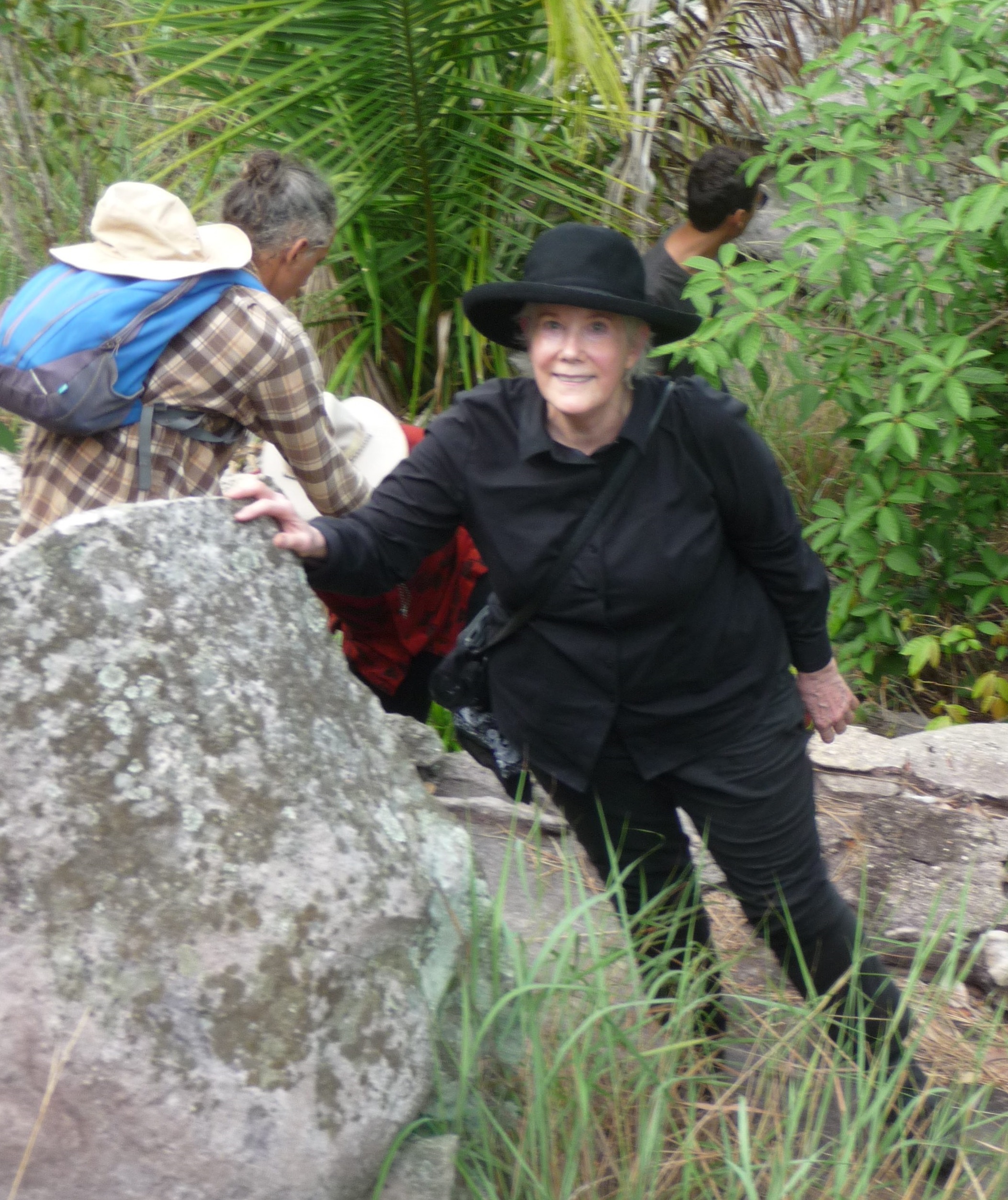 Anna Roosevelt climbing the steep path to one of Monte Alegre’s pictograph sites. 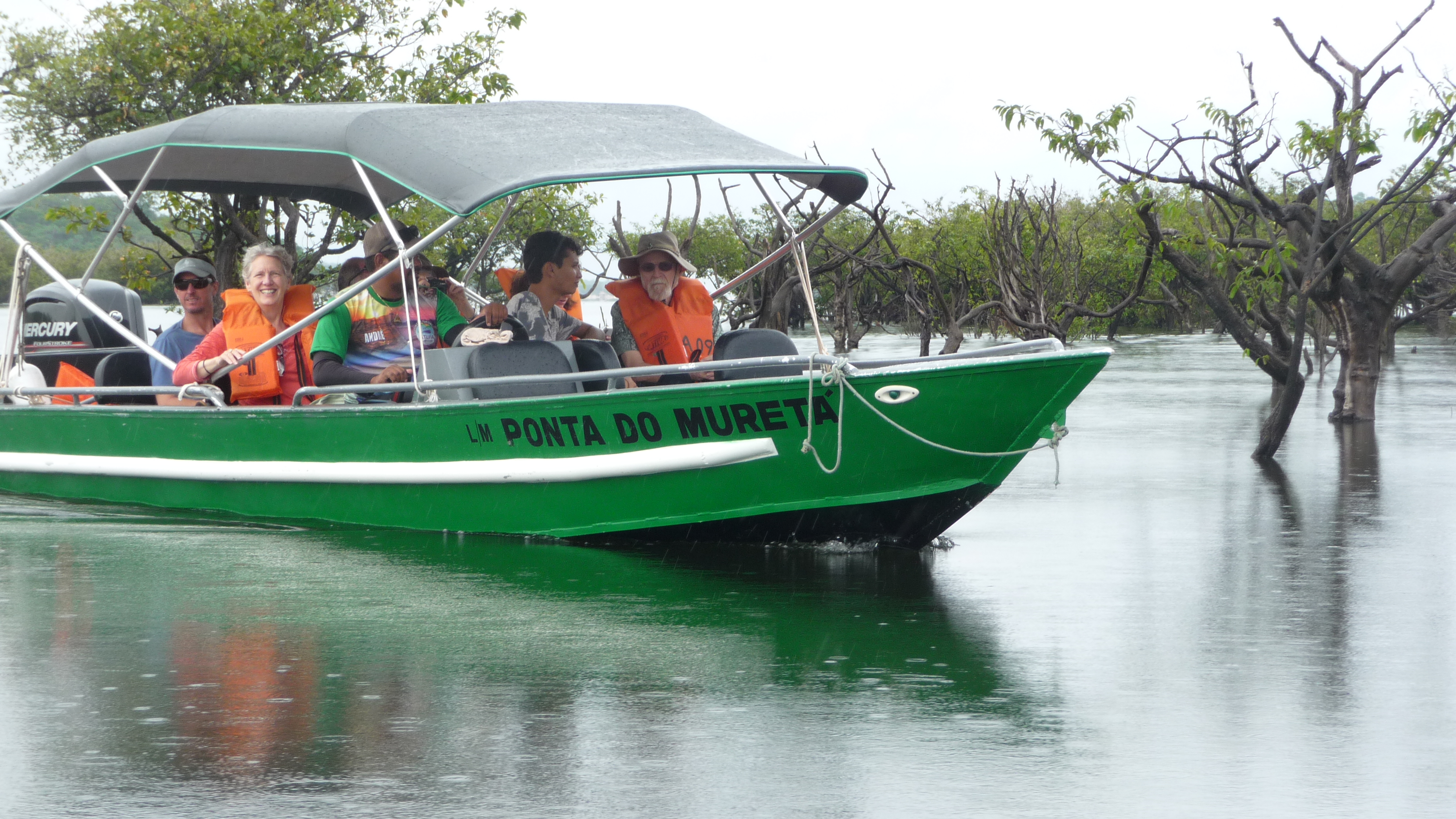 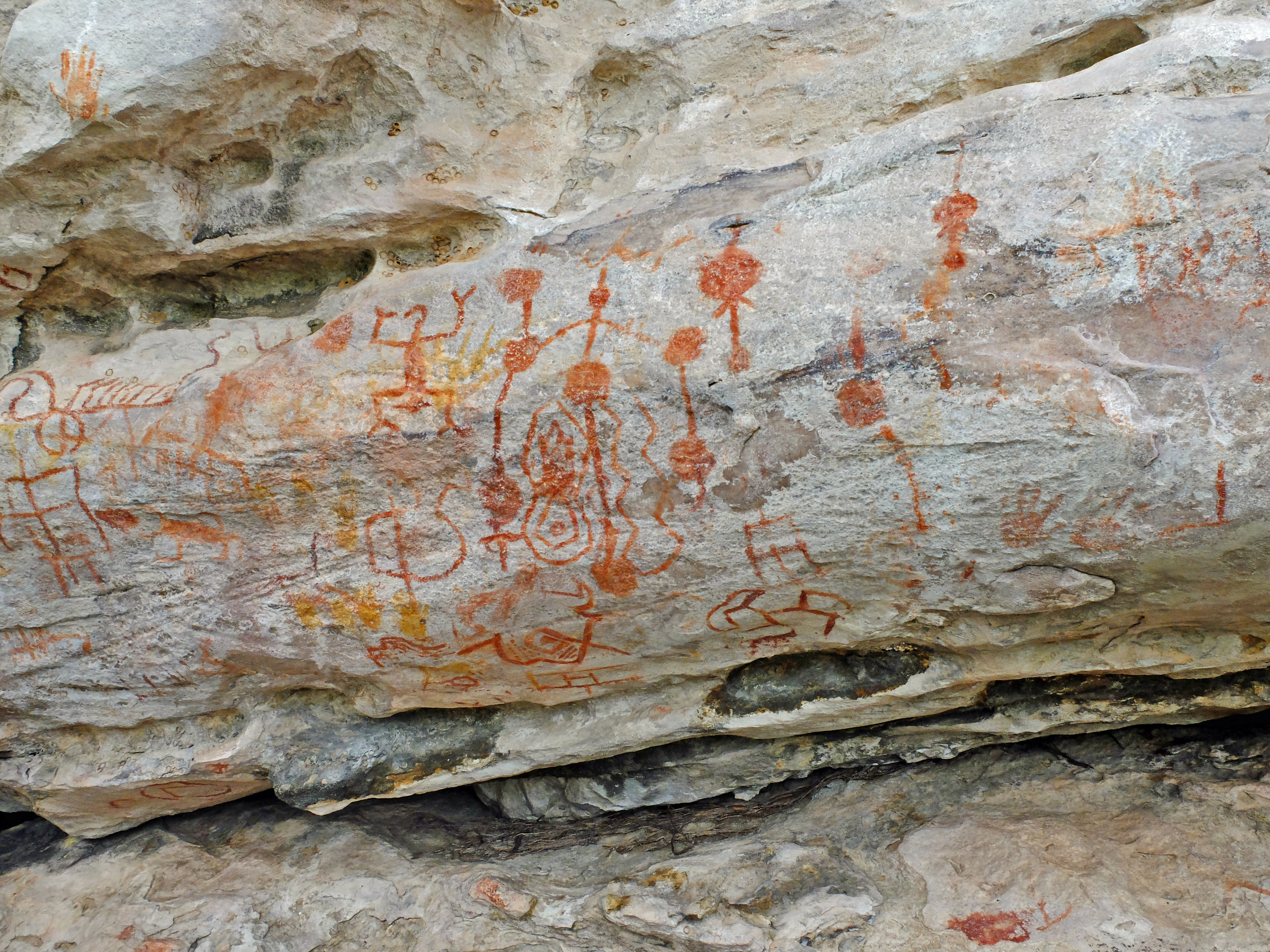 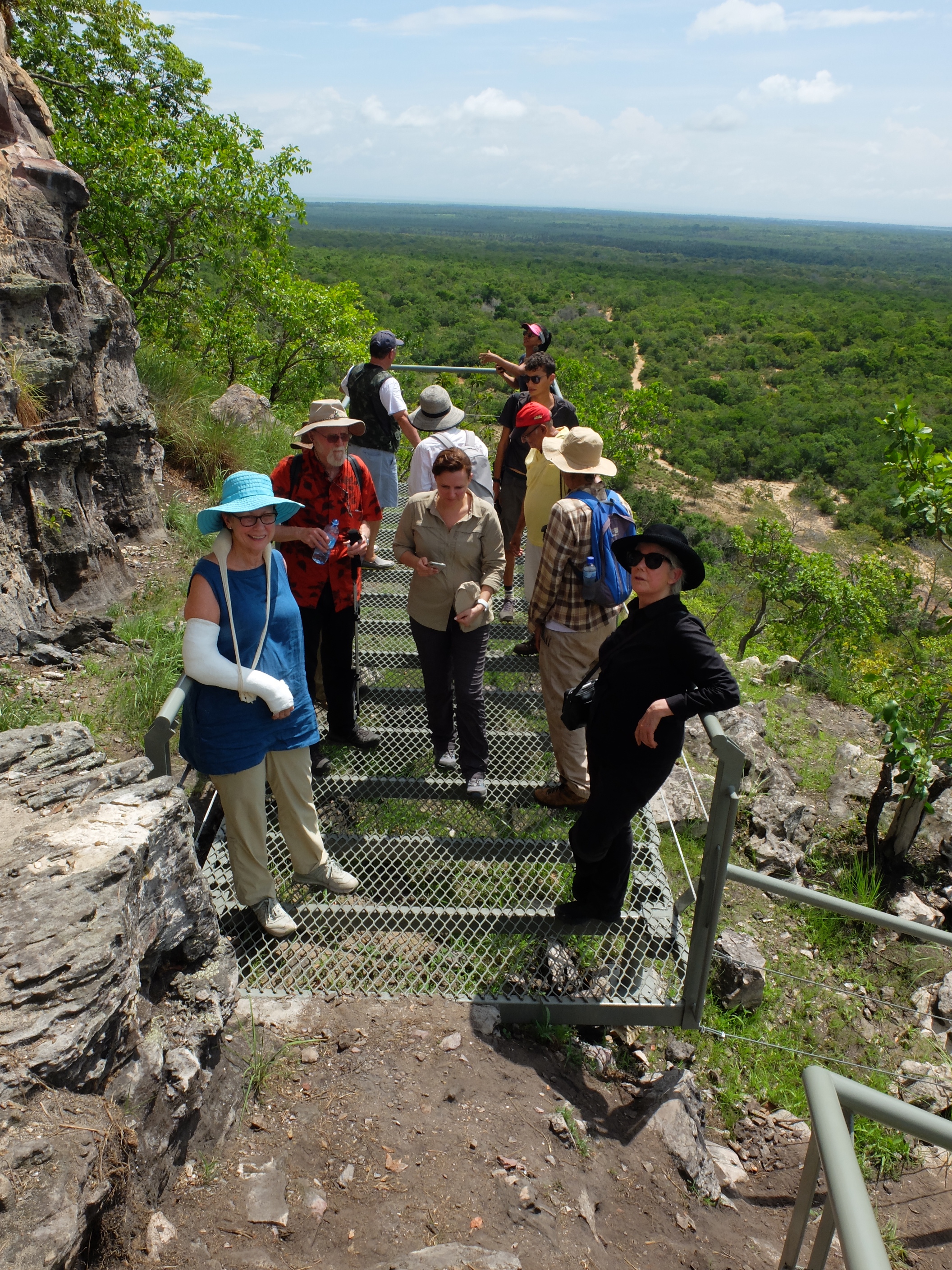 SAR members have unique access to regional and international trips led by experts.
Join SAR today and journey with us on our next adventure. Learn more and join! 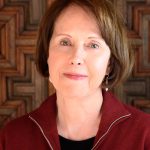 Diane Stanley Vennema is the author and/or illustrator of books for children and young adults. She publishes under her maiden name, Diane Stanley. She is a member of the SAR Board of Directors.