Ayahuasca Tourism in Perú: A Tale of Violence and Indigenous Resistance 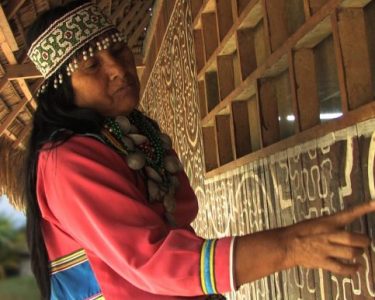 Abou Farman (Anthropology, The New School) was recently at SAR as a participant in the advanced seminar “Death Culture in the 21st Century,” co-chaired by Shannon Lee Dawdy (University of Chicago) and Tamara E. Kneese (U. San Francisco). Knowing about my interest in Amazonia, Abou passed along information on a recent tragedy in Amazonian Peru that took place not far from the major city of Pucallpa.  On April 19, 2018, a Canadian tourist murdered a prominent Shipibo elder and healer, Olivia Arévalo Lomas, by shooting her in cold blood in her village. Individuals soon captured the perpetrator, Sebastian Woodroffe, 41, executed him, and buried his body in the forest. The story made its way into the international press, although many aspects of the murder, including the killer’s motive, remain unclear.  Peruvian authorities subsequently arrested two men said to be primarily responsible for Woodroffe’s execution.

World interest in the killings has waned as these events recede into the distance, but Shipibo and Conibo people themselves continue to express concern about what some are calling “spiritual extractivism” associated with ayahuasca tourism. A document issued by the Shipibo Conibo Center of New York puts the situation this way:

People come to the Amazon to heal themselves of the culturally specific ailments of industrialized, individualistic societies – from addiction to depression to sexual, military and other forms of trauma to eating disorders and diseases and illnesses that have found no real cure in the halls of Western medicine. Then they get to leave but they leave behind traces of their ailments, trails of inequality, frustration, violence, and sometimes legal cases.

In August, a hundred Shipibo, Conibo, and Xetebo healers met to discuss these questions and organize a union of traditional healers along the lines of similar organizations in parts of Africa.  They issued a declaration that, among other things, states their intention to “investigate the development of a mechanism by which foreigners taking advantage of indigenous medicine, healing and spiritual labour might be able to contribute to the cultural and political empowerment of Shipibo-Konibo-Xetebo Peoples and their path towards self-determination.”  The complete declaration and related information can be accessed here.

These events are a sobering reminder that engagement of Indigenous peoples with external market forces—even those associated with the spiritual marketplace—can lead to unforeseen consequences, some positive, others negative.  It is imperative that seekers from the Global North assess the impact of their spiritual quest and do what they can to mitigate its potentially damaging effects.

Information about Icaros, a widely reviewed feature film about ayahuasca healing in Peru, for which Abou Farman has writing credits.  Abou and I engaged in a public discussion of the film after a showing in 2017.