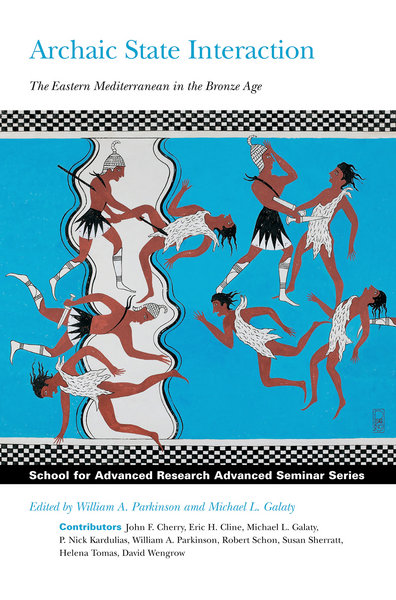 The Eastern Mediterranean in the Bronze Age

Edited by William A. Parkinson and Michael L. Galaty

In current archaeological research the failure to find common ground between world-systems theory believers and their counterparts has resulted in a stagnation of theoretical development in regards to modeling how early state societies interacted with their neighbors. This book is an attempt to redress these issues. By shifting the theoretical focus away from questions of state evolution to state interaction, the authors develop anthropological models for understanding how ancient states interacted with one another and with societies of different scales of economic and political organization. One of their goals has been to identify a theoretical middle ground that is neither dogmatic nor dismissive. The result is an innovative approach to modeling social interaction that will be helpful in exploring the relationship between social processes that occur at different geographic scales and over different temporal durations. The scholars who participated in the SAR Advanced Seminar that resulted in this book used a particular geographic and temporal context as a case study for developing anthropological models of interaction that are cross-cultural in scope but still deal well with the idiosyncrasies of specific culture histories.

“Parkinson and Galaty have produced a volume that assesses the importance of state interactions and presents competing methods unafraid to lay bare limits and differences of different approaches. Readers can make up their minds without being urged to join one side after being presented partial opinions and case studies. In addition, the volume contributes significantly to discourses defining the future of the discipline as the theoretical and empirical camps confront each other with the results in plain sight.”
—Andrea Vianello Intute, University of Oxford

“An excellent example of a meeting of the minds to hammer at an interesting and current set of problems affecting archaeologists around the world…. It is not necessary for the reader to be a believer in world-systems theory to benefit from these essays.”
—Thomas F. Tartaron, University of Pennsylvania

“Archaic State Interaction casts valuable new light on how extra-societal contacts may be implicated in processes of increasing social complexity. As the title makes clear, the contributors ground their discussions of interaction theory in the specific sequence of events dating to 3100–1000 BCE in that portion of the Mediterranean basin stretching from Italy to the Levantine Coast. Their goals, as stated clearly by Parkinson and Galaty in the introduction, are to consider how local social and economic changes, on the one hand, were related to variations in the intensity of interactions occurring at differing spatial and temporal scales; changes in how, and by whom, such contacts were conducted; and, shifts in the routes these transactions followed. The result is less a consensus than a healthy, productive debate on these issues.”
—Edward Schortman, Journal of World-Systems Research, 2011

“Parkinson and Galaty are to be commended for both the idea of this…volume and for its execution. The editors have worked hard to ensure a diversity of approaches and to contextualize these in ways useful to both anthropologists and ancient historians. The result is a substantive, largely jargon-free lesson in how theoretical models may be applied to data not usually viewed in this way. It will be a good teaching tool and a good bridge among disciplines.”
—Cynthia W. Shelmerdine, University of Texas, Austin, American Journal of Archaeology, July 2011

“The chapters in this volume each work toward a common goal of using a greater range of theoretical approaches in order to address social interaction in the Aegean world and its relationship with the wider eastern Mediterranean….The chapters are almost necessarily contradictory….The willingness of the editors to allow for contradictory views is a positive step toward enriching the field of Aegean prehistory. A reasoned and explicit statement about the approaches taken is always a valuable part of any study…it is clear that the editors and authors have thought carefully about their approaches to the evidence and its evaluation. It is hoped that such clearly stated eclecticism will continue to form part of the study of state societies in the eastern Mediterranean Bronze Age.”
—Joanna S. Smith, Princeton University, Bryn Mawr Classical Review

“This book should be read by a readership wider than that composed of specialists in the Bronze Age eastern Mediterranean, as the world-systems approach remains a powerful tool.”
—Antiquity, vol. 84, issue 326, December 2010

“[This book] gathers scholars of the Bronze Age eastern Mediterranean to reassess and refine world-systems theory and develop models of interactions between societies of different shapes and sizes.”
—Elizabeth Arkush, Dept. of Anthropology, University of Pittsburgh, American Anthropologist, vol. 113, no. 2, June 2011