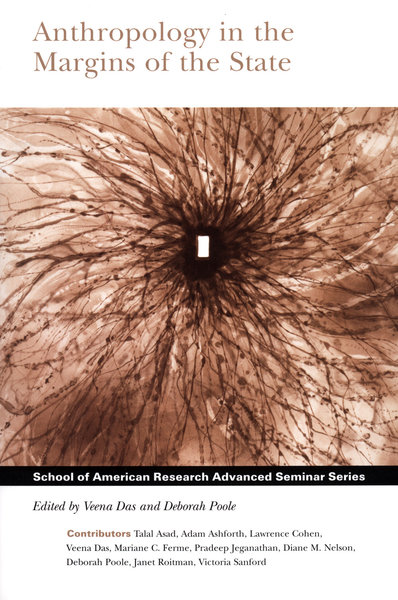 The very form and reach of the modern state are changing radically under the pressure of globalization. Featuring nine of the leading scholars in the field, this innovative exploration of these transformations develops an ethnographic methodology and theoretical apparatus to assess perceptions of power in three regions where state reform and violence have been particularly dramatic: Africa, Latin America, and South Asia. Rather than a geographic border, the term “margin” describes areas far from the centers of state sovereignty in which states are unable to ensure implementation of their programs and policies. Understanding how people perceive and experience the agency of the state; who is of, and not of, the state; and how practices at the margins shape the state itself are central themes.

Drawing on fieldwork in Sierra Leone, Sri Lanka, Peru, Guatemala, India, Chad, Colombia, and South Africa, the contributors examine official documentary practices and their forms and falsifications; the problems that highly mobile mercenaries, currency, goods, arms, and diamonds pose to the state; emerging non-state regulatory authorities; and the role language plays as cultures struggle to articulate their situation. These case studies provide wide-ranging analyses of the relationship between states and peoples on the edges of state power’s effective reign.

“This is an innovative collection on a seminal theme….Of particular importance is…the emphasis that the ‘margins’ are not peripheral to the working of the state but, on the contrary, highlight crucial aspects of its everyday functioning….Such an anthropology of the state is not about…looking up from the local level at the state as a distinct and more or less distant institution, but rather bout the omnipresent transgression of formal models that is part and parcel of the performance of any state organization in daily practice.”
—Dr. Peter Geschiere, University of Amsterdam

“This engaging, thoughtful book presents and sustains a distinctively anthropological perspective on the contemporary state and its relations to citizenship, identity, power, and daily life….The authors’ attention to the margins of state power leads us to consider the difficulty of drawing a line that separates zones within and without state control-insights that grow increasingly timely.”
—Dr. Ben Orlove, University of California, Davis

“[T]he contributors show how we can theorise and analyse the ‘spectral presence’ of the state on its margins, and how issues of hermeneutic power, representation, justice and citizenship involve an interplay of competing force-fields at such liminal locations as check-points, border crossings, military lines, black markets, bureaucratic counters and international frontiers.”
—Michael Jackson, Anthropological Forum, Vol. 16, no. 1 (March 2006)