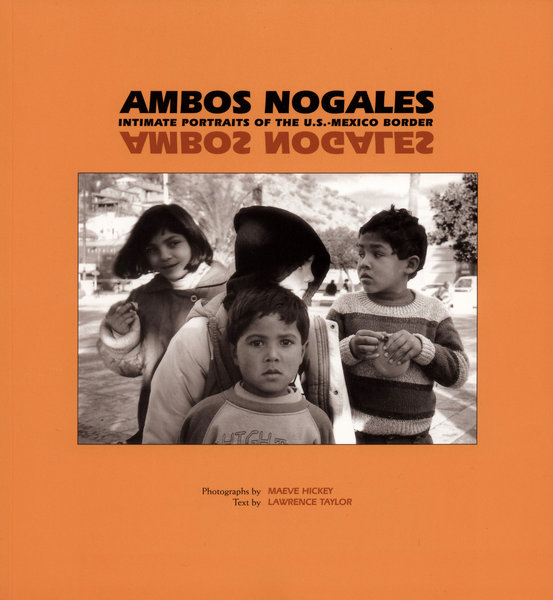 Intimate Portraits of the U.S.-Mexico Border

Evoking the startling contrasts, brutalities, radiant beauty, and resilient people, these astonishing duotone photographs and penetrating essays reveal the ironic embrace of Nogales. The would-be immigrant caught in the tunnel between Nogales, Sonora, and Nogales, Arizona, knows life is dangerous and surprising. Being robbed by roving bands of teenagers or even being flushed through to the United States by a torrential rain only to be caught by border patrol agents are both possibilities. In Nogales, Arizona, pampered California produce brokers in their hotels float lazily unaware, just yards from the tunnel that brings in immigrants and drugs. In Nogales, Sonora, old cobblestone neighborhoods meander into new ramshackle colonias towards the edge of the city, and a group of tunnel kids make a home in the house of a jailed drug lord.

Yet beneath the harsh realities there is another cultural world that flows softly and easily over the border, like the Anglo and Mexican ranchers with intricately tooled boots who cross cattle from Mexico to the United States or the Mexican-American mariachi singer with a beaming smile and an aunt who wishes she would stick to country-western. A paltry Mexican bullfighting arena holds the anxious young picador awaiting his first trial and a handsome matador, having just skirted death, who ceremoniously presents his hat to an admiring fan. And just beyond the late-night taco truck in Arizona, a homemade shrine to Our Lady of Guadalupe glimmers above Nogales Wash with outstretched arms.

“Hickey and Taylor’s accounts of life in the two Nogaleses are heartfelt and well told…. Ambos Nogales is a worthwhile read that will rest nicely on any border bookshelf. Its lucid and frequently lovely observations are presented in context but largely without interpretation, and that’s a good thing.”
—Jim Carvalho, Tucson Weekly

“In the minds of faraway policymakers, a fortified, floodlit steel wall separates Nogales, Arizona, from Nogales, Sonora. Real places, though, never begin and end quite where they’re supposed to. Agile wall-jumpers, Maeve Hickey and Lawrence Taylor lead their readers from one nation to the other, turning north here, south there, showing how dreams and disappointments, friends and enemies, are much the same on either side of the line. Offering an unaccustomed view of the U.S.-Mexico borderlands, theirs is an eye-opening journey.”
—Gregory McNamee

“Ambos Nogales: Intimate Portraits of the U.S.-Mexico Border, an exploration of ‘both cities’ named Nogales, in Arizona and the Mexican state of Sonora, offers an exquisitely beautiful yet disturbing look at the fronterra life of the Southwest. The high-quality black and white photographs by Maeve Hickey and the first-rate prose of travel writer Lawrence Taylor paint a vivid portrait …”
—Steve Jahrling, Mancos Daily Times