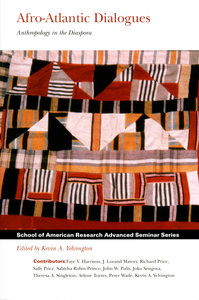 Anthropology in the Diaspora

Edited by Kevin A. Yelvington

This book breaks new theoretical and methodological ground in the study of the African diaspora in the Atlantic world. Leading scholars of archaeology, linguistics, and socio-cultural anthropology draw upon extensive field experiences and archival investigations of black communities in North America, the Caribbean, South America, and Africa to challenge received paradigms in Afro-American anthropology. They employ dialogic approaches that demand both an awareness of the historical fashioning of anthropology’s categories and self reflexive, critical research and define a new agenda for the field. Paying close attention to power, politics, and the dynamism of never-finished, open-ended behavioral forms and symbolic repertoires, the contributors address colonialism, the slave trade, racism, ethnogenesis, New World nationalism, urban identity politics, the development of artworlds, musics and their publics, the emergence of new religious and ritual forms, speech genres, and contested historical representations. The authors offer sophisticated interpretations of cultural change, exchange, appropriation, and re-appropriation that challenge simplistic notions of culture.

“Afro-Atlantic Dialogues will remain a landmark in the fields of research related to the African diaspora. This bibliography [presented in Afro-Atlantic Dialogues] is undoubtedly an invaluable tool for scholars and students alike. [This book] acts as a call to other scholars and especially to Africanists.”
—Giulia Bonacci, Ecole des Hautes Etudes en Sciences Sociales, Paris

“This four-part collection addresses key issues in African diaspora anthropology including hermeneutics, history, creolization, survivals, identity formation, international, as well as, disciplinary “dialogues,” and questions of authenticity. Kevin A. Yelvington’s “Introduction” grounds the volume in approaches that decenter meanings and treat culture as a process rather than a thing. [T]his important volume covers much disciplinary ground.”
—Laura A. Lewis, James Madison University, Anthrosource: Journal of Latin American and Caribbean Anthropology

“[T]his is a powerful, sophisticated, and timely contribution to anthropology and to African diaspora scholarship…. This book should be required reading for anthropologists and other scholars engaged in the study of culture, politics, and identity today. In Afro-Atlantic Dialogues: Anthropology in the Diaspora, Yelvington and the various contributors engage the past and present of Afro-American anthropology to make an even more compelling case for a fundamental rethinking of disciplinary practices of theory making and knowledge production.”
—Jemima Pierre, American Anthropologist, Vol. 110, No. 1 (March 2008)

“…a theoretically, historically, and ethnographically rich collection well suited for both advanced undergraduate and graduate courses on the history of of anthropology and the African Diaspora, as well as those dealing with issues related to race, nationalism, state formation, and empire.”
—Deborah A. Thomas, University of Pennsylvania, American Ethnologist, vol. 37, no. 3, August 2010

“In addition to its thoughtful discussion, what makes this volume especially welcome is that it offers some frank observations that need to be made…. There is a large and growing corss-disciplinary literature on African diasporas. In this collection, contributors’ thoughts about what directions we should pursue propel us forward by bringing us back to reflections on how both diaspora studies and anthropology should be done.”
—Aisha Khan, New West Indian Guide, vo. 83, no. 1&2, 2009

“This volume is a coherent and multifaceted contribution to both the anthropological study of the Afro Atlantic and the anthropology of studying the Afro Atlantic. It remains a vital source of information about intellectual and political debates four years after its publication, and a decade after the contributors dialoged in a seminar.”
—Pierre-Michel Fontaine, University of Miami, Transforming Anthropology, vol. 18, no. 1, 2010