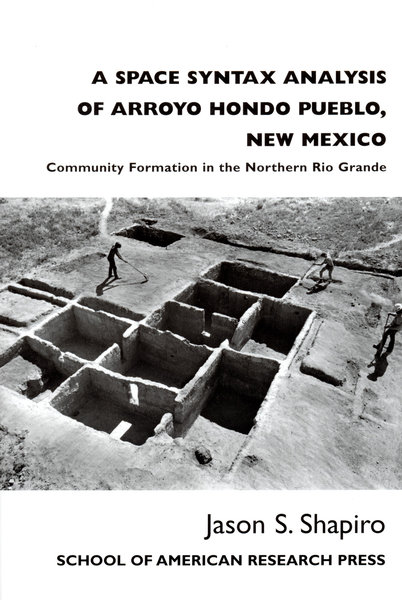 Until recently, archaeologists have rarely studied prehistoric architecture as if it were an artifact comparable to pottery or stone tools. Following the premise that built space embodies social organization, Jason Shapiro takes a fresh look at architectural data from Arroyo Hondo Pueblo, a fourteenth-century site in the northern Rio Grande Valley of present day New Mexico. Using the theoretical assumptions and mathematical techniques of space syntax analysis, he explores what changes in architecture reveal about people’s social lives. A significant shift toward greater residential “privacy” during the later period occurred in Arroyo Hondo as well as the contemporaneous pueblos of Tijeras and Puyé and twentieth-century Acoma Pueblo. This analysis demonstrates that transformations in the arrangement of space can illuminate social change even when they are not accompanied by changes in other kinds of artifacts or technologies.

“In the end, Shapiro’s study effectively abstracts a cultural system of dwelling into a mathematical system for comparative analysis. . . . Shapiro’s broader points are well reasoned and insightful, and they place welcomed emphasis on an important organizational shift in the prehistory of the northern Rio Grande.”
—Severin Fowles, Journal of Anthropological Research

“An excellent example of the burgeoning and welcome trend toward the reexamination of previously excavated sites in recent years.”
—Matthew Liebmann, Harvard University

“[This] innovative study explores the social dynamics behind the walls of Arroyo Hondo Pueblo, one of the largest, most spectaculr, early 14th-century Ancestral pueblo towns in the northern Rio Grande….Well-conceived, clearly written, and amply illustrated, this book encourages archaeologists to use new methods in pursuit of knowledge of the human past.”
—Linda S. Cordell, University of Colorado, Boulder

“Shapiro’s study…embarks on a new phase, by examining the excavation records and collections and asking questions ‘from a new perspective.’…Shapiro’s study is an excellent example of the value of this approach to architectural analysis in archaeology. Shapiro does a fine job of carefully explaining its unfamiliar concepts and walking the reader through his application of them to the study of Arroyo Hondo’s two temporal components.”
—David R. Wilcox, Journal of Field Archaeology Vol. 31, 2006, pg. 228-229

“This book is relevant for all Southwestern archaeologists and scholars interested in how material culture can be used to study social organization. With a meticulous analysis and logical interpretation of results, Shapiro’s study provides significant findings for Southwestern archaeology. It also provides an excellent example of the utility of space syntax as an analytical tool for understanding the social meaning of architecture.”
—T. J. Ferguson, The Journal Of The Royal Anthropological Institute, 13, no. 2 (June 2007)