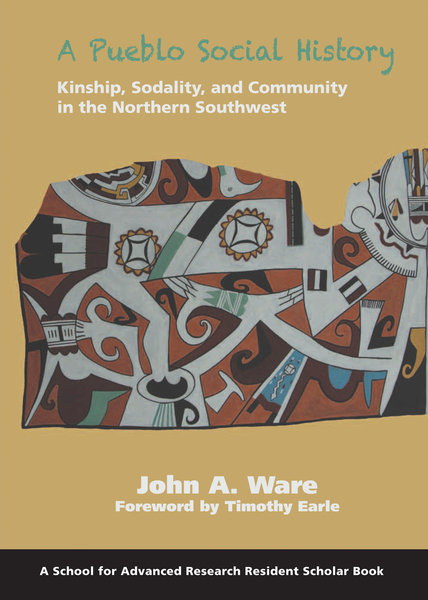 Kinship, Sodality, and Community in the Northern Southwest

A Pueblo Social History explores the intersection of archaeology, ethnohistory, and ethnology. Ware argues that all of the key Pueblo social, ceremonial, and political institutions—and their relative importance across the Pueblo world—can only be explained in terms of indigenous social history stretching back nearly two millennia. He shows that the principal community organizations of the Pueblos emerged for the first time nearly thirteen hundred years ago, and that the interaction of these organizations would forge most of the unique social practices and institutions described in the historical Pueblo ethnographies.

A Pueblo Social History offers new perspectives on the pithouse to pueblo transition, Chaco phenomenon, evolution of Rio Grande moieties, Western Pueblo lineages and clans, Katsina cult, great kivas, dynamics of village aggregation in the late prehistoric period, and much more. In the tradition of classic anthropological writings, this book focuses on the details of a particular case as it carries general lessons to the discipline. In the words of Timothy Earle, “A Pueblo Social History contains a subtle call to reconceive an anthropology grounded in the principles that made our discipline distinctive.”

“A Pueblo Social History is a grand new synthesis that transforms current understandings of the Puebloan past. Unusually for an archaeologist, Ware has a detailed knowledge of Pueblo ethnography, especially social organization, and its theoretical explanation by ethnologists. Refreshingly, he insists such ethnography is crucial to explaining prehistoric Puebloan social formations—lately an unpopular position among archaeologists allergic to ‘ethnographic analogy’ and in thrall to modish philosophical abstractions. Ware’s particular attention to kinship and ritual structures provides a vital sociocultural lens, just as kinship is seeing a renaissance in anthropology. His mastery of many scattered sources, sites, time-periods, and ethnographic facts brings a broad and deep coherence to Puebloan archaeology that has been sorely lacking. Serious dialog between Southwestern archaeology and ethnology has been neglected for far too long, to the analytical impoverishment of both. A Pueblo Social History deftly reinvigorates that dialog, persuasively demonstrating its benefits to scientific explanation.”
—Peter M. Whiteley, American Museum of Natural History

“This fine volume guides Southwesternists to rediscovery of forgotten ethnography about our near Native American neighbors. Ware questions American researchers’ focus on individuality and individual agency, and replaces categorical thinking with an analysis of the dynamic relationships among social collectives—kin-based groups and ritual sodalities. Most importantly, he emphasizes that centuries-old Pueblo institutions are alive and well; the story is not one of disjunction, but one of persistence and resistance to ‘modernization.’”
—Kelley Hays-Gilpin, Museum of Northern Arizona

“A Pueblo Social History is a brilliant tour de force about the archaeology and ethnography of the American Southwest. This thoroughly accessible work is a major contribution to the field with its penetrating analysis of the multifaceted historical connections between the Ancestral Pueblos and the contemporary Eastern and Western Pueblos. John Ware raises a number of significant theoretical and methodological issues about the study of past communities that reach well beyond the borders of the Southwest. This provocative book is a must read for anyone interested in ancient kinship-based organizations, ritual sodalities, community-level architecture, ethnographies as historical destinations, and cutting-edge, holistic approaches in anthropology.”
—Kent G. Lightfoot, University of California, Berkeley

“This is both an exciting and a controversial book. It is also an important contribution to understanding social changes during the development of the Puebloan peoples of the northern Southwest … Ware is the first to attempt such a broad, sweeping explanation of modern social organizations of the Pueblo peoples in over 50 years. A refreshing and exciting attempt.”
—William Longacre, University of Arizona

“John Ware has done a valuable service by summarizing the now-historical ethnographic literature in a concise volume, by reviewing classic anthropological debates concerning the origins and history of Pueblo social institutions in clear, non-technical language, and by presenting a coherent hypothesis as to how the Pueblos came to be as they were in the early twentieth century…. Ware’s book should provide a springboard for the continued development of a historical anthropology of the Pueblos.”
—Scott G. Ortman, University of Colorado, Boulder, American Antiquity, vol. 80, no. 1, 2015

“In A Pueblo Social History, archaeologist John Ware takes the reader on an engaging and provocative journey through the history of Puebloan peoples of the U.S. Southwest. Ware does more than simply synthesize a century of archaeological, ethnographic, and ethnohistoric research; he also convincingly argues that archaeologists have thrown the proverbial baby out with the bathwater by eschewing ethnography for understanding the past…. A Pueblo Social History compels us to seriously reassess the role of kinship in our archaeological explanations of the human past.”
—John Kantner, University of North Florida, Journal of Anthropological Research, vol. 71, 2015

“A Pueblo Social History is an ambitious book . . . an inspiring call to rethink Ancestral Pueblo archaeology and its articulation with the ethnography of American Indian societies.”
—Gregson Schachner, UCLA, Current Anthropology, December 2014