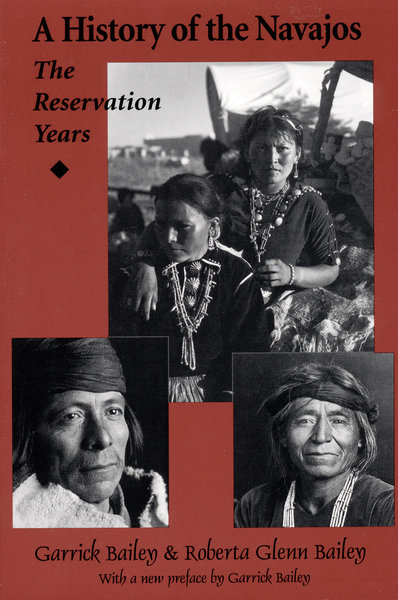 A History of the Navajos

When ethnohistorians Garrick and Roberta Bailey arrived in Farmington, New Mexico, in 1977 to conduct field research on the Navajos, they soon realized the truth of what they had been told by members of other tribes: Navajos weren’t like other Indians. While many Native Americans have subordinated their tribal identity to their identity as Indians, unique historical circumstances have allowed the Navajos to maintain their uniqueness.

A History of the Navajos examines these circumstances over the century and more that the tribe has lived on the reservation. In 1868, the year that the United States government released the Navajos from four years of imprisonment at Bosque Redondo and created the Navajo reservation, their very survival was in doubt. In spite of conflicts over land and administrative control, by the 1890s they had achieved a greater level of prosperity than at any previous time in their history.

Economic disasters such as the drought of the 1890s and the government’s program of livestock reduction in the 1930s did not compromise their rural integrity. Through two world wars, the change from a herding to a wage economy, the coming of the white man’s schools and religions, and a growing desire on the part of young people to own the goods and emulate the ways of the predominant culture, Navajo social identity remains intact. As one of the authors’ informants put it, “They’re still Navajos.”

“…shows how history has shaped the psychological reality of people who have continued to be resilient, persevering, and essentially Navajo. The people have survived. I know, I am Navajo…. I would recommend this text highly for those who wish to understand the history and imposed calamities my people have borne.”
—Rain Parrish, The New Mexican, 1999

“The Baileys have produced an informative and thoughtful book that will become the standard introduction to Navajo history in the American period.”
—American Indian Culture and Research Journal

“It is an indispensable resource, incorporating the viewpoint of the Navajo, and is welcomed by all historians, students, and anyone interested in the Navajo people and their way of life.”
—Libro Monthly

“A brilliant exposition of what anthropologists ought to be doing in ethnohistory….”
—Social/Cultural Anthropology