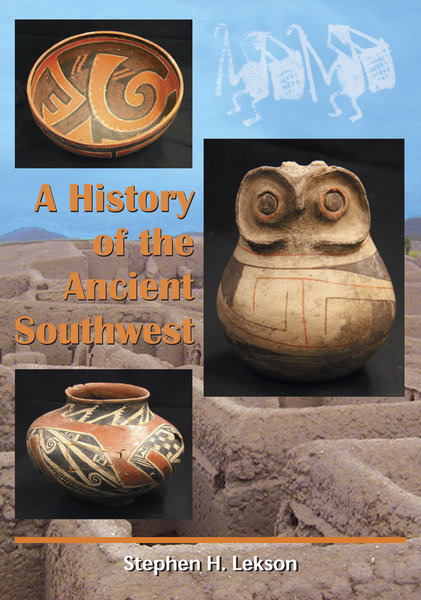 A History of the Ancient Southwest

According to archaeologist Stephen H. Lekson, much of what we think we know about the Southwest has been compressed into conventions and classifications and orthodoxies. This book challenges and reconfigures these accepted notions by telling two parallel stories, one about the development, personalities, and institutions of Southwestern archaeology and the other about interpretations of what actually happened in the ancient past. While many works would have us believe that nothing much ever happened in the ancient Southwest, this book argues that the region experienced rises and falls, kings and commoners, war and peace, triumphs and failures. In this view, Chaco Canyon was a geopolitical reaction to the “Colonial Period” Hohokam expansion and the Hohokam “Classic Period” was the product of refugee Chacoan nobles, chased off the Colorado Plateau by angry farmers. Far to the south, Casas Grandes was a failed attempt to create a Mesoamerican state, and modern Pueblo people—with societies so different from those at Chaco and Casas Grandes—deliberately rejected these monumental, hierarchical episodes of their past.

“In Southwestern archaeology, a mind like Steve Lekson’s comes along once in a generation. This is his magnum opus—a highwire act that strings hundreds of bold ideas into a dazzling new synthesis.”
—David Roberts, author of “In Search of the Old Ones”

“Stephen Lekson has written among the most provocative and forward-looking books in archaeology today…. If you’ve never read a Lekson book, start here. You’ll find an archaeology that doesn’t take itself too seriously, written with literary flair, wit, and a dash of sarcasm as only Lekson can.”
—Timothy Pauketat, University of Illinois, Champaign-Urbana

“…the story of the ancient Southwest and those who study its history makes for a fascinating tale. Recommended.”
—M. W. Graves, University of New Mexico, Choice, vol. 47, no. 9, May 2010

“About once in a generation, a writer…seeks to overturn established notions, and Stephen H. Lekson is this generation’s heretic laureate….a book that is both provocative and fun….Lekson turns Southwest archaeology into a series of tales, beguiling readers instead of lecturing them….this one is worth picking up.”
—David A. Phillips Jr., New Mexico Historical Review

“This…is a magnificent summary of what we know about our prehistory. Each two-part chapter…tries to describe both the key players (i.e., archaeological interpreters, past and present) and the cultures they interpret and/or argue about. Lekson does not hesitate to name names when analyzing views he sees as sometimes intentionally wrong-headed and, as you might imagine, he has some strong opinions about what is good in the field as well as what is bad.”
—Southwest Books of the Year Best Reading 2010

“Lekson does address the intellectual history of some of the most intriguing archaeological questions in the Southwest….He challenges some of the more widely accepted interpretations of these events, however, and offers new hypotheses regarding social interaction and the impetus behind the development of Chaco Canyon and Casas Grandes.”
—SMRC Revista, Spring/Summer 2010

“This book is a hoot to read. There are big ideas. There are new ideas. It is stimulating, idiosyncratic, brash, and exciting. There are analyses, syntheses, and descriptions of prehistoric periods as well as historic and recent archaeological practices, paradigms, and theories. There are imaginative speculations, and erudite discussions. There are also well developed arguments and startling conclusions…. Our profession could use more books like this one. Lekson makes us think.”
—Marc Thompson, NewsMac — New Mexico Archaeological Council

“Stephen Lekson is a gifted and passionate writer and speaker. The breadth of his knowledge…is remarkable, and the result is that he can posit relationships that many of us would never perceive, provocative relationships that lead us to ask new questions…. History [of the Ancient Southwest] includes many such ideas…and will continue to be widely read.”
—Stephen Plog, American Antiquity, 2011

“The narrative is an exciting mixture of hard archaeology intertwined with characters, ideas, and attitudes that made the archaeological record. Lekson paints a picture of the rise, fall, and adaption of both archaeological ideas and entire civilisations…. If you have any interest in the relationship between history and its handmaiden, or in how the present impinges on the past, or simply (as I did) wish to venture on a shore unknown, this is one to read.”
—Oliver Gilkes, Archaeologist at Andante Travels, Current World Archaeology, Issue 69, January 2015