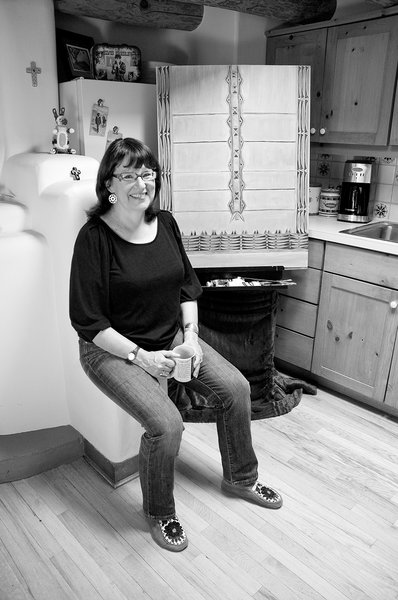 The long, painted hide coats at the center of Sherry Farrell Racette’s research project first came to her attention when, as a teenager, she saw one of them in a traveling exhibition from the National Museum of Canada (now the Canadian Museum of Civilization). “Because a lot of our Métis communities have been plucked clean, I was just blown away by the beauty of a lot of the pieces,” she recalls, “and then I saw this coat.”

Originally attributed to the Cree and Anishnabe, the intricately painted coats were generally made from a single large hide and embellished with porcupine quillwork. They were created from 1780–1820 and are scattered across museum collections in Europe and North America. They are no longer being made. “There is no memory of the coats in First Nations communities and, with rare exception, they have little provenance,” Racette found. After they kept “popping up” over the next few decades of her work as a teacher, scholar, activist, and artist, she began an inventory of existing coats in 2006 with a grant from Canada’s Social Sciences and Humanities Research Council. Racette has located nearly 30 coats, about a dozen of which are from the late 18th century.

“I want to ‘unpack’ these profoundly beautiful garments, to better understand the cultural memory encoded within them,” she says. “By combining linguistic memory, visual analysis, archival research, and the knowledge embedded within the coats themselves, a more complete history can be teased out.” Racette has found references to the coats in a variety of archival sources, including those of Hudson’s Bay Company, which controlled the fur trade in much of North America for several centuries. Many of those traders married indigenous women and forged intricate relationships with the Métis and First Nations peoples. Traditionally, women made and embellished garments for men, notes Racette. “The coats present an opportunity to explore the complex social networks that emerged during the fur trade, and the male body as a site for female artistic expression.”

Another research strategy involves connecting with indigenous community knowledge through stories, beliefs, and practices, including linguistic memory. “Language remembers when we forget,” says Racette. Drawing on her multi-faceted network of scholars, Cree speakers, elders, and artists who continue to work with large animal hides and porcupine quill, she has assembled a trove of information about the mesmerizing coats, and has begun to analyze the possible meanings of their iconography, construction, and history. One of her major goals is to make both half-sized and full-sized models of the coats, and take them back to the communities to see what memories they might trigger.

The exercise of replicating the coats also opens the possibility of reclaiming the knowledge held in each stage of production from tanning the hides, to assembling and tailoring the garment, to the painting and quillwork. “It’s a form of repatriation,” said Racette. “We may not be able to get the coats back, but the reason they are so valuable is that they represent what we have forgotten and what we have lost. Although the historical significance of the objects is irreplaceable, they become less precious if we have the capacity to create them again.”