Affiliation at time of award:
Assistant Professor
Department of English
University of Denver 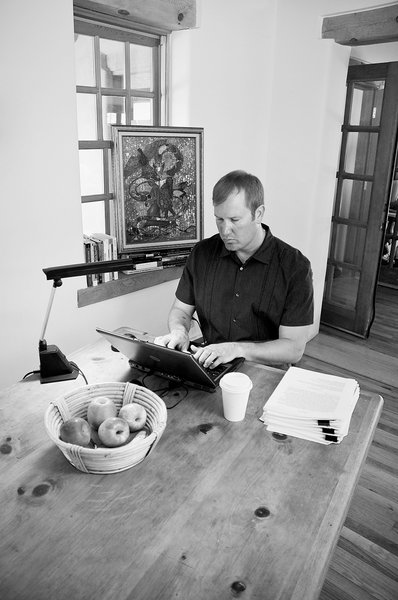 “The truth about stories is that’s all we are.” Chris Teuton uses this quote from Thomas King to emphasize the importance of storytelling to the Cherokee people. Oddly, however, there is no precise word in Cherokee for storytelling. In a language full of puns, the term used instead is gagoga, the word for lying—which brings us to the Turtle Island Liars’ Club.

Consisting of four men—Sequoyah Guess, Hastings Shade, Sam Still, and Woody Hansen—the Liars’ Club is a group of storytellers who have performed for more than 20 years and are recognized throughout the Cherokee Nation as traditional storytellers. Teuton is collaborating with them to produce the first volume of transcribed Western Cherokee oral traditional stories and cultural analysis published in both Cherokee and English since 1966. “These men are esteemed elders, cultural traditionalists, storytellers, and Cherokee language teachers,” said Teuton. “This book will not be a simple volume of stories, but a running narrative of my interaction and relationship with the Liars’ club as well. Who are these men? What does the Club mean to them? How do they conceive of storytelling?”

Like many tribal members, Teuton grew up in the Cherokee diaspora but returned to Cherokee land in Oklahoma often and learned about Cherokee history from his grandparents. As he conducted his research with the Liars’ Club, Teuton asked himself what his own role was. “I’m a friend, a kinsman, a researcher, and listener,” he said, “and a student of Cherokee culture. I want to be honest about my relationship with the members of the Liars’ club, to reflect these roles in the book, and to contribute back to the Cherokee Nation.”

The choice of the term liar for storyteller has an epistemological bent to it, Teuton says, “that plays on the idea of what’s truth and what’s fiction, and on the speculative nature of what stories can mean. At least within the Cherokee tradition, stories are all about speculating. They’re designed to be cognitive tools to make you think, and in such a way that you keep coming back to them and seeing things from new perspectives as you grow older. The story changes with time and with experience, and I think that’s what the whole idea of ‘lying’ comes out of: is it true or is it a lie? It depends on your perspective.”

As a Native American literary studies scholar specializing in the relationship between oral and literate discourses, Teuton found his work with the Liars’ Club benefited from setting aside certain methodologies that come out of ethnographic and anthropological theory and folklore studies. “I let the methodology for the study develop out of their concepts, ideas, and cultural traditions. And actually, what the Liars’ Club members do is pretty similar to what we do as literary scholars in interpretation. I found the best thing to do, like anyone learning from one’s elders, is to sit back, shut up, and listen.”

Teuton and the Club members agreed it was critical to include contemporary stories in the volume along with traditional stories and stories recounting Cherokee history because they want to avoid the perception that Cherokee storytelling is an art of the past. “There’s always an element of people who think, ‘well, we had storytellers but they’re all gone.’ You open a book like James Mooney’s Myths of the Cherokee and you think those must be the authentic traditional stories, not the ones you hear from your elders. It’s important to ask what we mean by ‘traditional’—and is it static or dynamic? I think the Liars’ Club members are steadfastly saying that it’s a dynamic thing that changes with time and according to the needs of the community.”