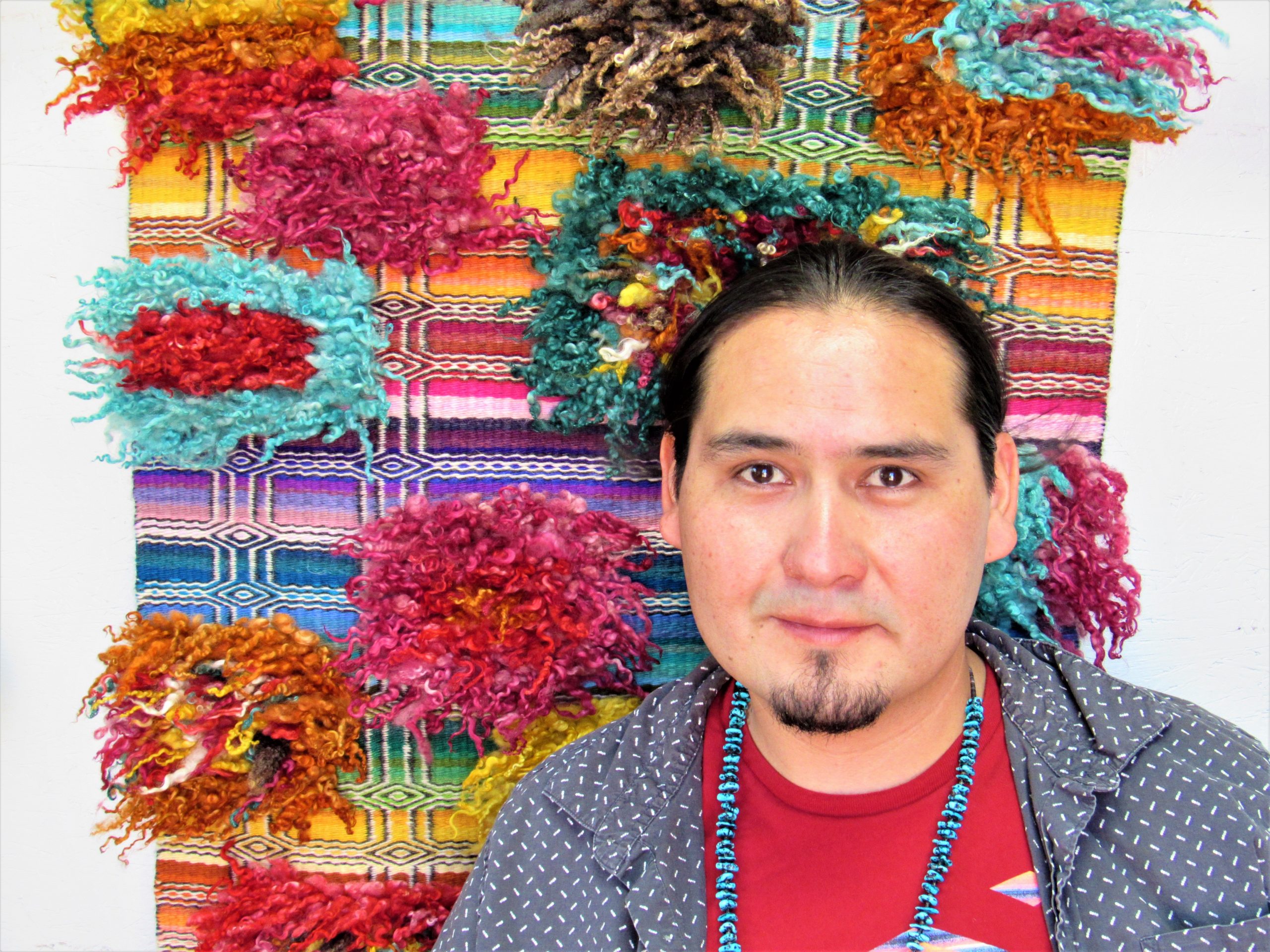 The School for Advanced Research is pleased to welcome weaver and fiber artist, Venancio Aragon, as the 2020 Rollin and Mary Ella King Native Artist Fellow. Aragon is a citizen of the Navajo Nation, and has been weaving since age 10, which is when he first began learning from his mother. Venancio holds degrees in both Cultural Anthropology and Native American and Indigenous Studies. Additionally, he has spent the last decade working for the National Parks Service as an interpretive park ranger at several archeological sites in the Southwest. Aragon has explained that through his practice, he synthesizes his education and culture with art.

Aragon comments: “I fuse bold geometric designs with a saturation of color that reflects an individualistic and technological freedom of expression. I see my tapestries as a living record of the cultural survival of my people and as a testament to the current vitality of my heritage.”

During his time at SAR, Aragon looks forward to accessing the IARC textile collection, to study rare structures of weavings and techniques that fall beyond the common plain tapestry style. In his research, if he encounters any unfamiliar technique, he plans to attempt to reverse engineer the structures, with the goal of developing guides for other Navajo weavers to utilize and learn from. He is particularly interested in twill technique variations that are not commonly seen in publications. For his project, Aragon will develop a series of textiles that explore these unfamiliar or uncommon weaving techniques, with the objective of creating six textiles, each measuring 20 by 25 inches in size. For these small textiles, Aragon will utilize the Navajo upright tension loom, as well as traditional materials such as wool warp and weft, and dyes that will be both synthetic and natural but will “deviate sharply in color range from ‘traditional’ Navajo palettes.”

Aragon hopes that this project will also serve as an important educational opportunity for the public to learn about Navajo weaving techniques that are less-commonly known and undervalued by the art world. In Aragon’s words: “I look forward to the opportunity to challenge my art and research skills while at the School for Advanced Research and to return to my community with knowledge important to the survival of our cultural arts.”

Join us online for this event. Register for the program here and join us from home to hear his presentation and join the conversation). Venancio Aragon (Navajo)  has been working to develop a series of textiles that explore  unfamiliar or uncommon weaving techniques. Join us as he talks about his work and time as SAR’s 2020 Rollin and Mary Ella King Native Artist Fellow. More information here.