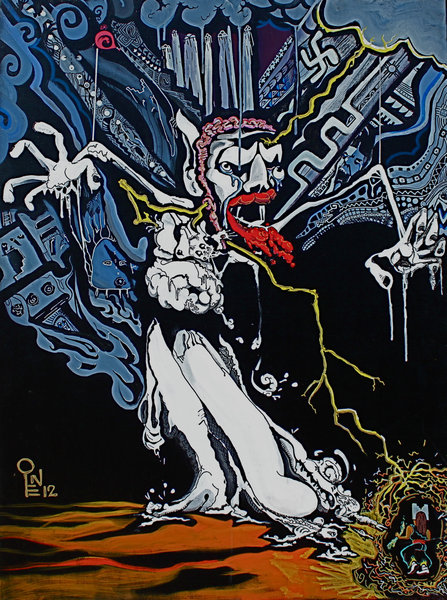 The School for Advanced Research is pleased to welcome Ehren Kee Natay, Kewa (Santo Domingo Pueblo) and Dine (Navajo), as the 2014 Rollin and Mary Ella King Fellow. Natay is a two dimensional designer and painter, working with computer graphic technology and traditional hand-executed (painted) imagery. He seeks to examine issues such as cultural amnesia, cross-culture exchange, gender-roles and the exploration of his own heritage. He has won awards from the Museum of Indian Arts and Culture Native Treasures Fine Art Show, the Wheelwright Museum of the American Indian, and the Artist Designed Collection Fellowship at the Southwest Association for Indian Arts (SWAIA).

Ehren Kee Natay’s artist talk at the end of his artist residency at SAR. Videography by John Sadd


Recently, Natay has sought to re-conceptualize his method of creation. His aim is to better understand his responsibilities to his community, to himself, and to his artistic vision. He says, “I am seeking to answer this self-imposed question: how can I honor the unique, stylized imagery of the indigenous Southwest in a way that respects the sacredness of my cultural heritage (Kewa/Dine) and myself as an artist and as an individual.”

While at SAR, Natay will complete imagery that portrays the lunch-time feeding at a Pueblo feast day. This Pueblo ritual often includes outsiders and on-lookers, allowing the audience to feel as though they are an invited guest at a table at which a unique cultural exchange is taking place. According to Natay:

The scenario also provides multiple facets for exploration of visually suggestive commentary that is especially pertinent to Native American tribes. For example, the meal could serve to speak about cultural amnesia in relation to traditional foods, while women laboriously serving the table could suggest commentary about gender-roles. The scene can be controversial, yet thoughtful, and still preserve the sanctity of the festivities.

This project will progress from hand-drawn sketches and observations, to detailed, single Adobe Illustrator components allowing for infinite possibilities of placement, scale and color. The layout complete, Natay will transfer the image to a tangible surface.

Ehren Kee Natay will be in residence from September 2, to December 1, 2014.

Ehren Kee Natay’s artist talk at the end of his artist residency at SAR. Videography by John Sadd

Pleae join Ehren Kee Natay (Kewa/Diné),2014 Rollin and Mary Ella King Fellow, as he discusses his work during his fellowship at SAR. Natay is a two-dimensional designer and painter interested in examining issues such as cultural amnesia, cross-cultural exchange, gender roles, and the exploration of heritage.