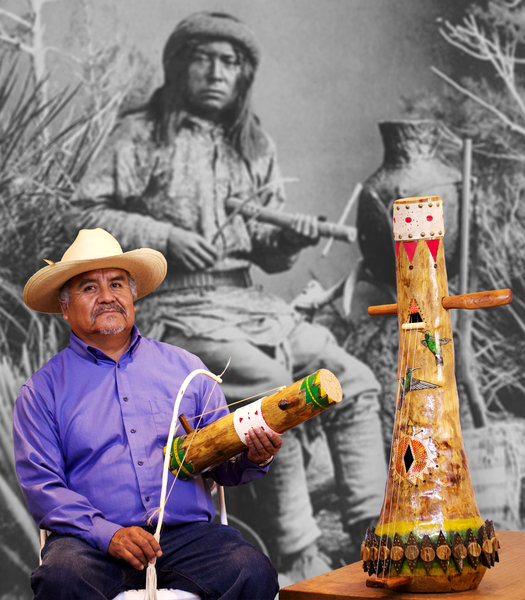 The School for Advanced Research is pleased to welcome musical instrument maker Anthony Belvado as the 2014 Ronald and Susan Dubin Native Artist Fellow. Belvado is San Carlos Apache, from San Carlos, Arizona. A third-generation Apache fiddle maker, Belvado was taught this craft by his grandfather. Little is known about this unusual string instrument and he hopes to preserve and promote the tsíí’ edo’a’tl and other Apache arts and crafts to a wider audience.

2014 Dubin Fellow Anthony Belvado talks about the process of making Apache violins and their importance. Video by John Sadd.

I would like to find ways of communicating meaningful information about these arts, such as the significance of the natural materials used, the distances traveled to obtain them, the hours spent in their making, and the teachings associated with them. As these teachings have been passed down from generations, there is a traditional way of life that should be shared with generations of Apache people through a local cultural center or museum.

While at SAR, Belvado will construct at least one tsíí’ edo’a’tl (Apache fiddle). He will gather the stalk of agave, mesquite wood and roots, pine pitch, an acacia branch, and horse hair. Using knowledge passed down from his grandfather, Belvado first must remove the outer bark of the agave, sand it smooth, split it and remove the pulp, and re-glue the two halves together. The agave will then be sanded, painted, and cut for sound holes. Holes must then be drilled for pegs, string holder, string tightener, and tuner. Pegs are constructed from mesquite and the bow is made from an acacia branch. The fiddle will receive two coats of varnish and be strung with horse hair. The tension is then adjusted and pine pitch applied so that it will produce sound.

Anthony Belvado was born on the San Carlos Indian Reservation and was raised off the reservation by foster parents. He studied at Haskell Indian Junior College and the Institute of American Indian Arts. Most recently, he has shown and lectured on Apache fiddles at the Heard Museum and the Musical Instrument Museum in Phoenix, Arizona, where he was commissioned to make an Apache-style bow for the Amos Gustina fiddle in the permanent collection. In 2013, Belvado lectured on the cultural significance of the Apache fiddle at the Red Earth Festival in Oklahoma City, Oklahoma. Belvado will be in residence from June 16–August 15, 2014.