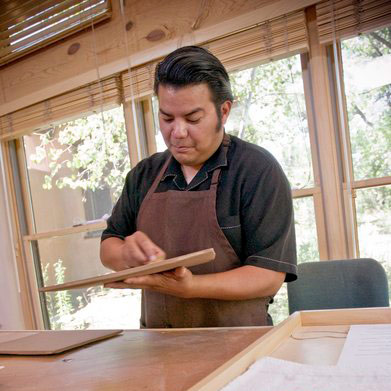 Jason Garcia [Okuu Pin’/ Turtle Mountain] of Santa Clara Pueblo is the 2007 Ronald and Susan Dubin Artist Fellow. Jason, who has been working in clay for the past fifteen years and primarily on tiles since 2001, comes from a long line of traditional and contemporary Pueblo potters that includes his parents, Gloria (Goldenrod) and John Garcia. Jason says, “I learned by watching and learning from my parents and other family members, including my aunts and grandmothers.” His work on tile, creating “two dimensional images on a three dimensional surface, was inspired by the late Pablita Velarde’s mineral paintings on masonite.”

Jason received his Bachelor’s degree in Fine Arts from the University of New Mexico. His work has been presented at a one-man show at the Indian Pueblo Cultural Center in Albuquerque (2006-2007), and at group shows at the Museum of Fine Arts in Santa Fe, the Museum of Indian Arts and Culture, Santa Fe, and the Heard Museum in Phoenix. He has been awarded an Artists Choice Award (2004), a Best of Division Award (2003), and a First Place in Class II, Division F (2002) at the SWAIA Indian Market in Santa Fe. He is also featured in Kim and Pat Messier’s Hopi & Pueblo Tiles and in Steve Trimble’s 20th anniversary edition of Talking with the Clay: The Art of Pueblo Pottery in the 21st Century from SAR Press.

Jason uses traditional materials such as hand-dug clay and mineral pigments collected at Santa Clara Pueblo and other locations. “My clay work documents the cultural traditions and values of Santa Clara Pueblo…focusing on…Pueblo daily life scenes, ceremonial dances, historical events, the constant change of the Santa Clara Pueblo landscape, and religious icons.” While at SAR, Jason will use the inspiration of the IARC collections to create tiles that represent various stages of the School’s relationship with Santa Clara Pueblo, through its founder Dr. Edgar Lee Hewett, who with his students, excavated at Puje, “Where Rabbits Gather,” the Ancestral Village of Santa Clara Pueblo.

The School for Advanced Research is happy to welcome Jason Garcia as the 2007 Ronald N. and Susan Dubin Native American Artist Fellow.