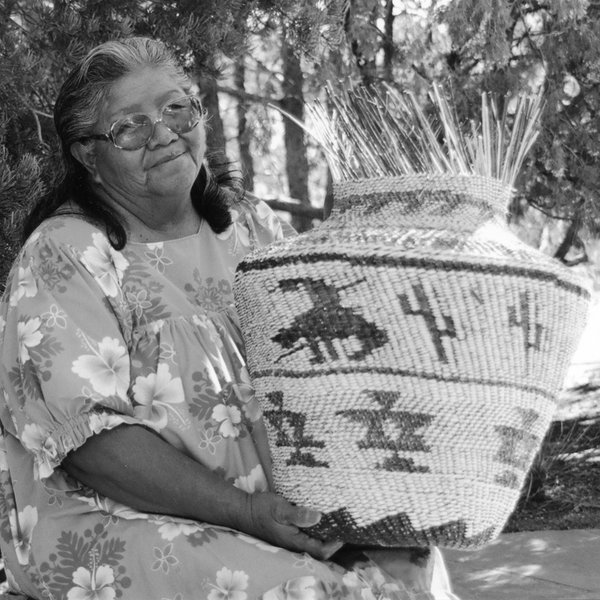 Evalena Henry, of Peridot, Arizona, is recognized as a master basket weaver among the San Carlos Apaches. Her mother, Cecilia Henry, taught her to make baskets when she was fifteen years old. Cecilia Henry played a vital role in the renaissance of twined basket making that has occurred on the San Carlos Reservation since the 1960s. “ I learned it from my mother. It was very difficult at first to learn how to split the willow. But I wanted to learn so badly. I love baskets….baskets are a very special art, our traditional art….”

The Apache make three distinct basket types: coiled trays and plates; the tus, an urn shaped water container; and the burden basket. Evalena specializes in making ceremonial baskets, large baskets and burden baskets for the Sunrise Dance, a coming of age ceremony for girls. “I use different kinds of willows, sumac, and cottonwood. There are about eight different kinds of natural colored willows: black, red, maroon, yellow, green, brown, orange, gray and cottonwood for white.” She uses images of deer, crown dancers, butterflies, and zigzag lines that represent the “Triplet” mountains to decorate her baskets, and often incorporates her mother’s hallmark pattern, an interpretation of an image on a highway overpass, called the “freeway” or “wave” pattern in her baskets. Tin cones are attached to the ends of buckskin-fringe on her burden baskets, something her mother was credited for reintroducing in the 1950s and 1960s.

Cecilia Nelson Henry (1902-1996) made her first basket when she was six and continued making them until she was 89. Her grandmother raised her and a cousin after their mothers died. Their grandmother did not have a home and traveled by horse, camping in the mountains around San Carlos with the girls. Not wanting them to be sent to boarding school, she hid them and they were continually on the move. They would stay in a place for a few days, make baskets, and then move on. When she found sumac willows in the mountains she would make baskets and trade for food and supplies with the army camps in the area. She would go down alone, leaving the girls behind, and bring the food back.

The girls dutifully observed how baskets were made, from the kinds of materials she used to the designs she incorporated. Authorities finally caught up with them when the girls were in their teens and sent them to boarding school. Cecilia was able to leave school only after an arranged marriage to Robert Henry. She and her husband had nine children—five girls and four boys. Four of her daughters carry on the basket weaving tradition and have received recognition for their work.

Evalena feels it is important to carry on her mother’s work and keep the tradition of basket weaving alive, otherwise, “Our art would die. On other reservations, the artists that used to make baskets are gone, they’re looking for somebody who still can pick it up again, or keep it going. We have a lot of reservations like that.”

She has taught at the Taos Art Institute (New Mexico) and at many different reservations including Camp Verde in Arizona, and she was awarded the 2001 National Heritage Fellowship in the Folk and Traditional Arts from the National Endowment for the Arts. Different tribes often ask her to weave special baskets for official purposes. Many people collect Evalena’s baskets. She has won numerous awards and is widely recognized for her work.

At 65, Evalena continues to weave and to instruct other people in basket weaving skills. “I am a teacher now,” she says.