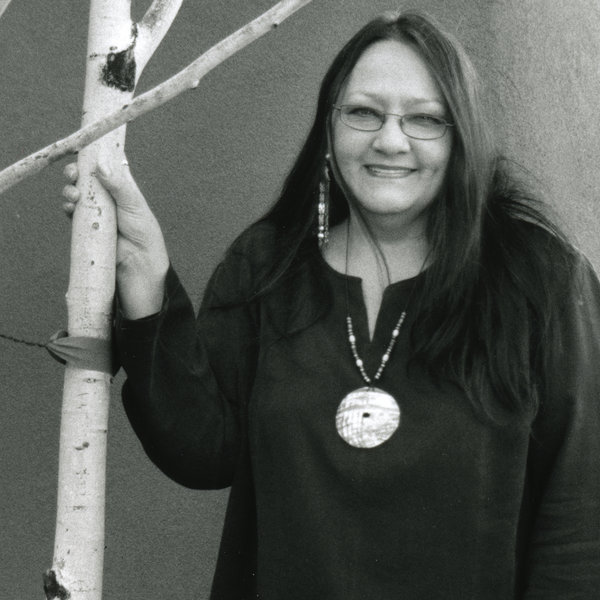 “I began writing poetry because of the poetics and density of Cheyenne and Muscogee oral history as related by my Cheyenne mother and her parents and my Muscogee father and his parents. There was an orderliness, consistency, and elegance that sounded to me the way poetry is structured on the page. There also was a deliberate use of silence for emphasis that not only lends itself to poetic form, but is poetic form,” writes Suzan Shown Harjo, the 2004 Indian Arts Research Center’s Eric and Barbara Dobkin Native American Artist Fellow at the School for Advanced Research. Ms. Harjo, who was awarded the fellowship in February, is president and CEO of The Morning Star Institute in Washington, D.C., and a columnist for the newspaper Indian Country Today.

An innate passion for life, Native rights, and traditional and cultural advocacy govern Ms. Harjo’s commitment to a public life. They also shape her radiant orchestrations of poetry, which embody her quest for memory, honor, and knowledge. This talented poet, writer, lecturer, curator, and policy advocate has helped Native peoples recover more than one million acres of land and numerous sacred places in the United States. Since 1975, she has developed key federal Indian law, including the most important national policy advances in the modern era for the protection of Native American cultures and the arts: the 1978 American Indian Religious Freedom Act; the 1989 National Museum of the American Indian Act; the 1990 Native American Graves Protection and Repatriation Act; and the 1996 Executive Order on Indian Sacred Sites.

Suzan expresses her commitments as a woman and an advocate for human rights in many ways. In addition to her work in the public arena, her poems evoke a grace and passion embracing all patterns of life. They are an art form nurtured by her family, a rich cultural heritage, and her private and public activities. She participates in ceremonies at both Cheyenne and Muscogee sacred places. Perhaps it is these experiences of the sacred that inspire her words and give them agency and intellectual and emotional power. In her poem, “gathering rites,” she explores “some ways Native women have of being in the world.” She wrote “gathering rites” for the first International Women’s Day in the 1970s and presented it at the literary kick-off event in New York City, “Women/Voices at Town Hall,” where she was one of twenty American women writers, including Nikki Giovanni and Alice Walker. She later presented the work on the West Steps of the U.S. Capitol and, most recently, for the Ladyfest DC celebration of International Women’s Day in 2002 in Washington.

Suzan Harjo’s poems give the reader a feeling of pleasure and satisfaction, a feeling that she has achieved perfection. They also carry an essential quality of passion. Many of her poems, particularly “Songs Who Sing,” present life and death struggles and emphasize renewal, honor, and respect for all human activity. In general, her work illustrates that this modern writer, at least, does not think on so abstract a level that she has lost those human qualities that speak to family, traditional ways, and spiritual inspiration and emotion. Embodied in all her work is an underlying cultural structure that leads one into territories that may be unfamiliar, yet the reader is nonetheless astounded by the beauty within. Ms. Harjo notes, “Poetry appeals to me because it can have the grace of water and the focus of rock, even in the same piece, and it accommodates both facts and color in the same space.”

During her stay at the School for Advanced Research, Suzan hopes that she will have time “to concentrate on developing an oral history poetry collection recounting the peoples, ways, forces, dynamics that brought about the repatriation law and policies (1967 to 1990), and certain experiences and results over the past dozen years.” She would like to leave the Indian Arts Research Center with “some oral history poems that are informed by the experience with the IARC collection and my time at SAR.”

In addition to her writing, Ms. Harjo will participate in a series of seminars and lectures at the School for Advanced Research and will continue her tenure as a 2004 IARC Summer Scholar. We welcome Suzan Shown Harjo and look forward to hearing the fruits of her work and participating in the events she will conduct.