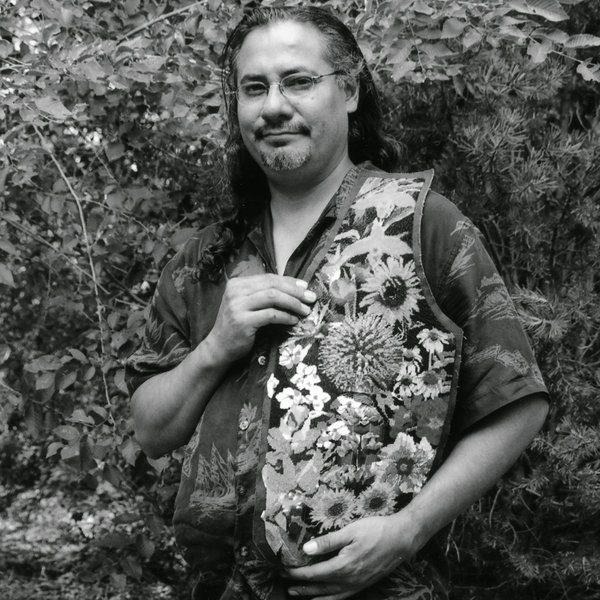 Marcus Amerman, Choctaw, has been named the Ronald N. and Susan Dubin Native American Fellow for 2004. Marcus is a painter, sculptor, and an extraordinary bead worker. He began doing beadwork at the age of ten, he says, “as a response to growing up in a very creative environment. Almost everyone in my extended family did beadwork for our own personal use and for adornment as Indians and pow-wow participants, and I quite naturally adopted and adapted this family tradition.”

His work is a mixture of traditional native subject matter and technique with contemporary elements and a “Marcus” spin. His beadwork and painting are drenched with color and commentary. Because of elements such as these, Marcus is one of the most influential and important voices in the Indian artist activist world. He was one of the first leaders in the movement against the use of Native-themed mascots in professional sports and his work often has a satirical, ironic, and humorous tone.

Marcus is known nationally and internationally for his pictorial-style beadwork. His creations have appeared in 40 exhibitions since 1987, including “Who Stole the Tee Pee?”, Smithsonian Institution, National Museum of the American Indian, New York, NY, “Fusing Traditions: Transformations in Glass by Native American Artists”, Museum of Craft and Folk Art, San Francisco, Ca, and “Native Views: Influences of Modern Culture”, nationally-touring Artrain USA (an art museum on rails). He has won honors at the Indian Art Northwest festival (an Oregon fine art market featuring Native artists), the Heard Museum Indian Fair & Market in Phoenix, and is a three-time winner of the Native Artist Choice Award at the Southwestern Association for Indian Arts Indian Market in Santa Fe. His education includes study at Whitman College (Walla Walla), the Institute of American Indian Arts (Santa Fe), and the Anthropology Film Center (Santa Fe). He has also worked in short films, dance, fashion design, acting, and street theater.

Marcus will access the Indian Arts Research Center collection to study design and function for aesthetic and spiritual inspiration-searching for inspiration or, rather, having it find him as he walks through the vaults. The beaded floral vest he hopes to create “would be the largest and most intricate work I have ever attempted, and I imagine that it would garner attention for both traditional and contemporary Native beadwork and for my place in its evolution.”

IARC at the School for Advanced Research is pleased to welcome this remarkable and innovative artist as the Ronald N. and Susan Dubin Fellow for 2004.