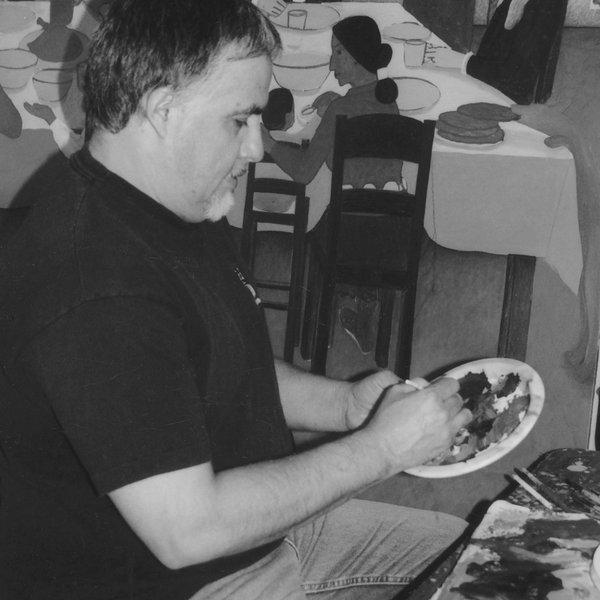 David Bradley, Minnesota Chippewa, has been named the 2004 Rollin and Mary Ella King Fellow. Bradley considers himself a painter, printmaker, sculptor, jeweler, and ceramicist. “To be an artist is to seek truth. I think that artists should retain the freedom to experiment and explore at all times; they must follow their heart. Art is about freedom and with that freedom comes responsibility. I try to use my art to spotlight the Indian worldview and socio-political realities. To expose social injustice is to overcome it.”

His paintings have a narrative, folk approach and draw on his experience and observations. They are whimsical and humorous, but upon closer scrutiny it is clear that Bradley makes socio-political statements through allegory to comment on the serious issues and tensions that underscore Indian life today. In addition to painting, Bradley also works in mixed media, using collage and found objects in works that are more allegorical and symbolic as well as abstract. Influences in his work include Allan Houser, Fritz Scholder, Diego Rivera, Fernando Botero, and Henri Rousseau.

Bradley began drawing at an early age and signed up for all the art classes he was allowed to take in high school. He received an A.F.A. from the Institute of American Indian Arts in Santa Fe, New Mexico, where he studied jewelry, ceramics, sculpture, painting, and printmaking. He later returned to IAIA as guest instructor and artist-in-residence. He also studied at the University of Arizona and received his B.F.A. from the College of Santa Fe.

He has served on the IAIA Board of Regents, the Board of Directors of the Southwestern Association on Indian Affairs and other boards, has been a guest speaker at Peabody Museum of Archaeology and Ethnology and Harvard University, and has had solo and group shows, including “Beyond Beads and Feathers,” Portland Art Museum, Portland Oregon (2002); “Indian Art/Facts,” George Eastman House Museum, Rochester, New York (2002); “Traditions and Visions,” Muckenthaler Cultural Center Foundation Gallery, Fullerton, California (2001); and “Indian Humor,” National Museum of the American Indian, Smithsonian Institution, Washington, DC (1998). He has also been a regular participant in the annual Santa Fe Indian Market.

While at the Indian Arts Research Center, Bradley will be doing large works for his upcoming two-man show at the Museum of Indian Arts and Culture in Santa Fe. He will also do some smaller still-life works portraying some of the objects in the IARC collection and he may also paint watercolors of the SAR campus.

IARC is pleased to welcome this diverse and talented artist/scholar as the Rollin and Mary Ella King Fellow.