Located along Interstate 25 halfway between the metropolitan cities of Albuquerque and Santa Fe, New Mexico, present-day San Felipe Pueblo (Katishtya in Keres, the language of the Pueblo) is considered one of the most culturally conservative pueblos. Similar to other pueblos, San Felipe does not allow visual or audio representations of its Pueblo or its activities and closes the village for certain ceremonies.

The Rio Grande River runs through San Felipe with homes on both the east and west sides of the river. As of 2013, enrollment included approximately 3,500 individuals. Most residents work in neighboring cities, although the Pueblo employs many of its people for tribal government and casino positions. Other wage economies in the Pueblo include federal government positions through the schools and health service. 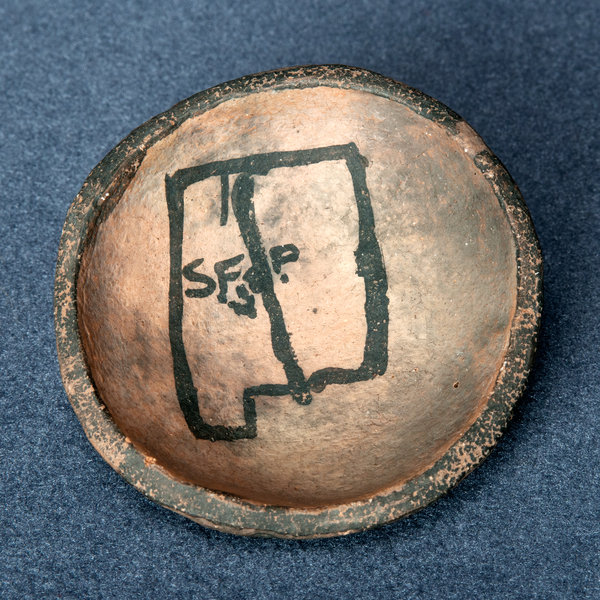 The interior of this bowl depicts New Mexico State with San Felipe Pueblo marked on the map.
The Rio Grande runs through the state and the Pueblo. Courtesy Arizona State Museum; E-8976.

San Felipe celebrates its feast day on May 1, the feast of Saint Philip. During the Pueblo’s feast day one of the most notable features is its large sunken plaza. Sitting three feet below the level of its surrounding area, the plaza represents centuries of ceremony and dance that have endured despite drastic changes over time and space. 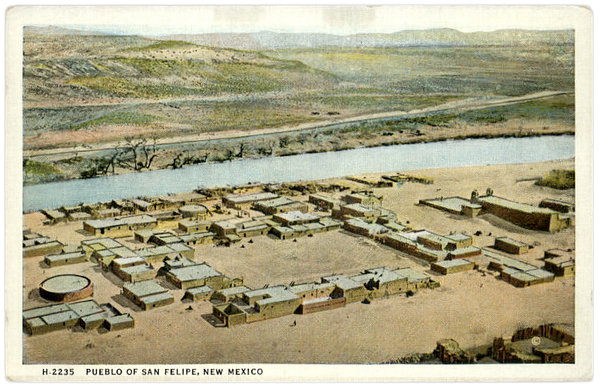 Oral histories and archaeological evidence trace the ancestors of San Felipe and other Keres-speaking Pueblos to the area surrounding Chaco Canyon, up into the Aztec and Mesa Verde region and down into Acoma and the middle Puerco. After several migrations, they established Kuapa. Located south of Bandelier National Monument on the Parajito Plateau, Kuapa was once occupied by the ancestors of modern-day Cochiti and San Felipe Pueblos. Occupied from roughly 1200-1400, the inhabitants at Kuapa were eventually driven out by what Adolph Bandelier speculates may have been hostile Tewa groups. Residents of Kuapa split with one group, eventually establishing what is now Cochiti Pueblo. The other group went to Tunque and then Katishtya. After abandoning Katishtya during the Pueblo Revolt era and moving a few more times, they finally settled in their current location, also called Katishtya.

The historical record of San Felipe tends to be scant, including information about artistic traditions. Most accounts assume the Pueblo does not have a strong tradition of art production, including pottery. The potters, on the other hand, spoke about hearing from their grandparents and others about past potters, jewelers, weavers, and moccasin makers, but these artistic traditions were kept mostly internal to the community.