Daryl is a contemporary potter from the Pueblo of San Felipe. He began making pottery soon after graduating from high school when his mother, Sara Candelaria, seeing him in front of the television, handed him a lump of clay and said, “Make something.” His mother taught him to make pottery. She, in turn, learned from her mother, Juanita Toledo, a Jemez woman who worked with Evelyn Vigil to revive the old Pecos style of pottery.

Daryl’s innovative work is the result of years of research. As a child, he noticed an absence of San Felipe pottery being taught in schools. When he grew up, he began creating his own pottery and researched pottery styles and designs, not only of San Felipe, but of other pueblos and tribes in the Southwest. For several years he worked at the School of American Research (now School for Advanced Research) in Santa Fe. There, Daryl studied SAR’s collection of contemporary and historic pottery, as well as pre-contact pottery shards. 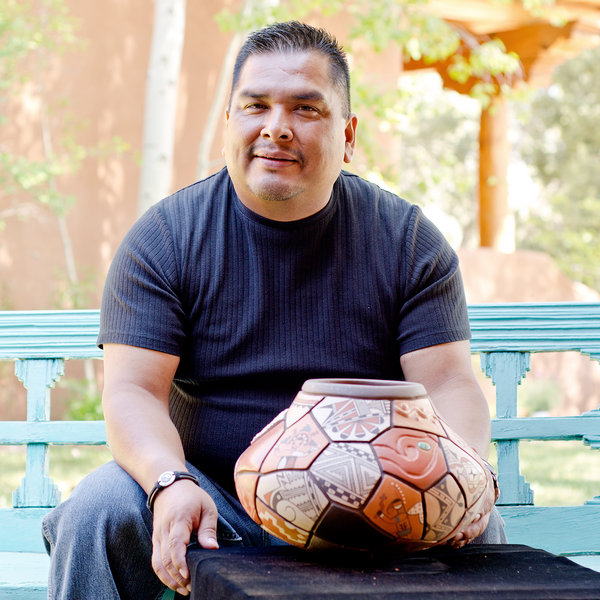 Daryl’s extensive research forms the inspiration for what he calls his “shard” pottery. His distinctive technique involves depicting numerous individual pottery designs from different pueblos and Native cultures on a single pot. The clay between individual designs is then deeply carved to create the appearance of a pot composed of separate “shards.” Design elements range from pre-contact to contemporary motifs.

Daryl Candelaria talks about incorporating the history of Pueblo pottery into his work from ancient Mimbres-style designs to more contemporary motifs.


In describing his work, Daryl says:

Art and pottery, I believe, like any form of art, are always evolving. You don’t want to settle on a set style, and it gets stagnant after a while … With my own creativity and kind of pushing the envelope and saying ‘What else can I do that I myself can accomplish and people will like?’ So in a way it’s progressive, I would say… Creativity is endless, and there are always different possibilities, and it’s just something that I envision and look forward to in my work.

Daryl is an award-winning artist, having won First in Class and First in Division at the 1999 Santa Fe Indian Market. He also has won numerous awards at the Eight Northern Pueblos show. In 2001, he received a boost in his career when he was invited as one of two Pueblo artists to participate in a month-long ceramic exposition hosted in South Korea. His work can be found at the Denver Art Museum; Indian Pueblo Cultural Center in Albuquerque, New Mexico; Mint Museum of Art in Raleigh, North Carolina; the Museum of Indian Arts & Culture in Santa Fe, New Mexico; and internationally at the Museum of Ceramics in South Korea. 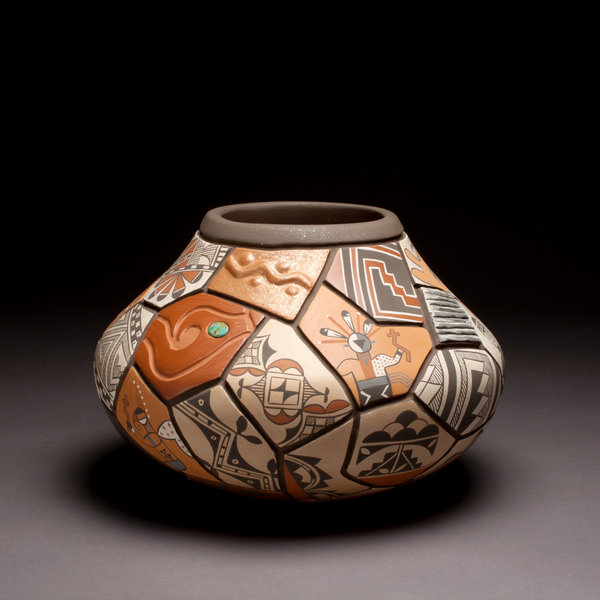 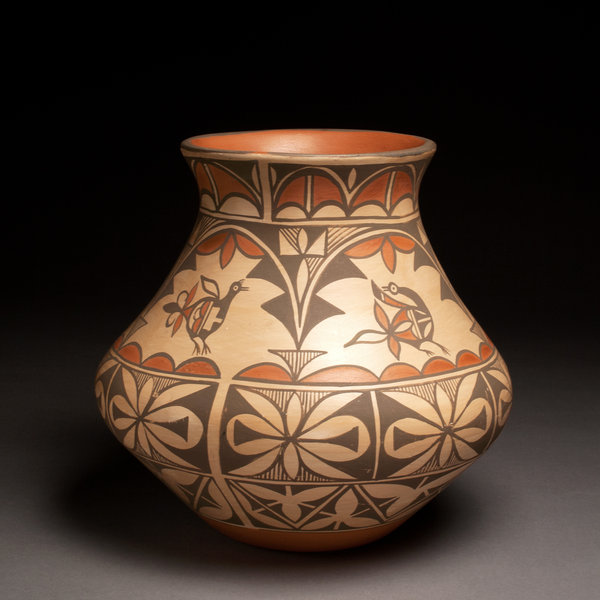 Daryl continues to be fascinated with Pueblo pottery, especially with ancient and historic Pueblo pottery. He is currently researching the pottery of Tunque Pueblo, an ancestral village of San Felipe, located six miles east of the historic village of Katishtya. Daryl’s hallmark is a stylized water serpent, a symbol of his Keres name, which he often incorporates into his pottery designs.