Deborah Boehm notes in her 2016 book, Returned: Going and Coming in an Age of Deportation a story that feels all too familiar in 2019:

Emy describes detention as “one of the most horrible moments” she had ever experienced. It was devastating to go from being a law-abiding mother and housewife to being a “caged animal.” Prior to deportation, Emy, one of the few women in her community to migrate autonomously, always approached life’s challenges with an optimistic attitude: “Ni modo” (Oh well) was a common response if someone questioned her choices or lifestyle. But detention and the subsequent deportation were a violation that had worn her down. After just a few short days in a facility in Texas, she said she thought she might, “go crazy.” She told me that she contemplated suicide, an act that was previously inconceivable to her. In fact, there are growing numbers of deaths of migrants while in custody, detention, and/or at the hand of U.S. agents. And when migrants are released to violent cities along the U.S.-Mexico border and returned to communities in Mexico that are struggling with insecurity, violation continues, intensified or even perpetuated because of the U.S. removal of foreign nationals.

Returned presents an extensive study of how U.S. immigration policies and state removals affect individuals, families, and larger communities. After Boehm finished the 2016 publication, which she partially wrote as an SAR research associate in 2013, she knew she needed to do more. During her research, she had formed deep relationships with immigrant families impacted by deportation. “Many of those I had interviewed had also been detained, and their stories were so harrowing,” she says. “Their lives had been unraveled by state action.”

A Professor of Anthropology and Gender, Race and Identity at the University of Nevada, Reno, Boehm has studied transnational migration since the 1990s. On a 2016 sabbatical in Tucson as a Residential Scholar at the University of Arizona’s School of Anthropology, she began researching and working with community groups around the Eloy and Florence, AZ, detention centers. She recognized that even deportees who had not been detained had still come in contact with the immigration enforcement system in the form of Border Patrol stations, ICE offices, or immigration courts. People who have been deported “have horrific memories of what happened that continue to affect them long after. These [places] are very traumatic and violent spaces,” Boehm says. 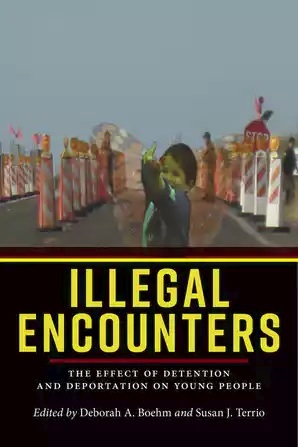 Illegal Encounters (2019), co-edited by Deborah Boehm, considers illegality, deportability, and deportation in the lives of young people—those who migrate and those who are affected by the migration of others.

As thousands of immigrants continue to arrive at our southern border, overcrowded and unsanitary detention centers, reports of deaths, separated families and detainee abuses are increasing. The need for more information and transparency is vital. Boehm’s goal is to build a concrete understanding of what is happening, especially because the public has little access to accurate information about the US immigration detention system, including how it works in local communities.  “This is a broad system that we need to understand in a very nuanced way,” she notes.

For her new project, “A Study of Unseen Spaces: US Immigration Detention in 21st Century”, Boehm received a 2019-2020 Mellon/ACLS Scholars & Society Fellowship to spend the coming academic year conducting research at multiple U.S. field sites in partnership with Freedom for Immigrants, a national organization that supports people in detention.

The project’s design is to bring an anthropological and ethnographic perspective to the issue. Anthropologists’ methods involve studying places and communities over time, she notes, but most detention-center visitors are severely limited in what they are able to observe. Boehm hopes to change that. “What I am interested in is how different spaces of detention operate, control people’s lives, lack transparency, and contribute to abuses and suffering,” she says.

Her ultimate goal is to broadly disseminate the results of the project to public audiences, and to gain support for the reform and ultimate abolishment of the detention system.

She looks back on her SAR residency as a gift of support and professional growth that still resonates today. “The opportunity to write was so amazing,” she notes, as was the chance to interact with other resident scholars, many of whom she is still in touch with. “Even if their research topics were different from mine, I was able to connect with a vibrant community of scholars and find common theoretical interests,” she says.